Not just Kentucky hype - Oscar Tshiebewe is BY FAR the most valuable player in college basketball after the Wildcats destroyed Kansas this weekend. Below this tweet is the email that went to almost all Athletic Departments the morning of January 31 outlining the numbers and then listing the rest of the top 25. Another piece on the www.valueaddbasketball.com ratings appeared on this CBS site. 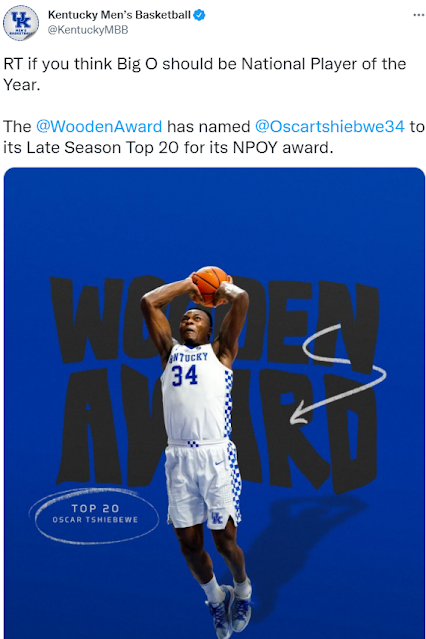 We ran the updated calculations for college basketball players prior to the 1st kick-off of the two incredible Conference playoff games resulting in a Rams-Bengals Super Bowl.

(Note, if you want updates on John Pudner's non-sports organization simply click on www.takebackaction.org to sign up.)

You can click on the image below or www.valueaddbasketball.com to pull up the ratings for all 4,281 Division 1 college players, or simply sort by conference, team or player as shown in the image.

Click here for our posts on all 32 all-conference teams, or on this CBS/247 site for more information.

You can look up the following numbers for all players, but we will use the top-rated player for the explanation of what each number means.

Oscar Tshiebwe's 17 point, 14 rebound, 4 steal performance in Kentucky's dominant win at Kansas followed his 21,22,3 performance in the same categories against Mississippi State to move into the clear lead in the Value Add Basketball Player of the Year calculations.

The system calculates a players points above replacement in the same way www.kenpom.com calculates the offensive and defensive and overall ratings for college basketball teams.

The Notes field includes information on the most common position played, and the weighting on that position to make the measurement a true measure of points above replacement at his position.

For example, Tshiebwe actually calculates with an even higher points above average replacement, but because most centers calculate higher than players at other possessions, his 11.27 rating was lowered from the non-position specific calculation.

Posted by JohnPudner at 8:55 PM