Just a few more days until the www.valueaddbasketball.com ratings of current players are updated ... but in the meantime this Value Add Basketball Game may have featured my favorite historical team against the team that looks to me like it might be the best in history based on their player cards in the game.

As for my favorite historical team, the 1971 Marquette combo of All-American point guard Dean Meminger and dominant center Jim Chones put a scare into overall 2-seed Duke. Duke's fast pace in the game adds 3 possessions, which is why possessions 47, 46 and 45 are written in on the top of the sheet. Marquette led most of the way, leading 45-41 with only 13:50 (23 possessions) left in the game.

The actual 1971 Marquette team was 29-1, losing only their final game in the tournament against Ohio State by 1 point after a controversial 5th foul was called against Meminger with 5 minutes to play. Chones started the next year 20-0 before leaving for the ABA to finish with a 49-1 career record.

In our game Chones led the game in rebounds with a double-double (12 points, 10 rebounds) while Meminger (top steal range in the game with 11-20, meaning he steals from all players on a dice roll of 31) and popular TV analyst Jay Williams gave an epic battle at point guard. Both disrupted the opposing offense with Meminger's five steals and Williams six steals.

The the game repeated history when Meminger fouled out and Williams took over, hitting three 3-pointers en route to a 25-point game and an 80-69 win to move Duke 2001 to the Elite 8 of the tournament.

While Duke's four losses were not as good as Marquette's one loss season in real life, that was against one of the most rugged ACC seasons ever. They tied their hated rival UNC for the regular season title, and then destroyed them 79-53 in the ACC title game as a sign of things to come.

In the Final 4 they trailed another great ACC foe Maryland 17-39, only to show off the largest comeback in Final 4 history to win 95-84, and beat Arizona for the title shortly after Lute Olsen's wife passed away

Like 1971 Marquette, 2001 Duke had a second All-American, with Shane Battier (17 points, 9 rebounds in our game). Both Battier and Carlos Boozer (17 points, 7 rebounds) both had a couple of clutch blocked shots as well.

As great as Duke looked in this game, their Elite 8 game could be a tough draw. They get either last year's national champs from Baylor who looked dominant with a 23 point win in the first round, or Isaiah Thomas' 1981 champs from Indiana.

Our set up below is from my walking desk overlooking Milwaukee, across the street from Marquette. 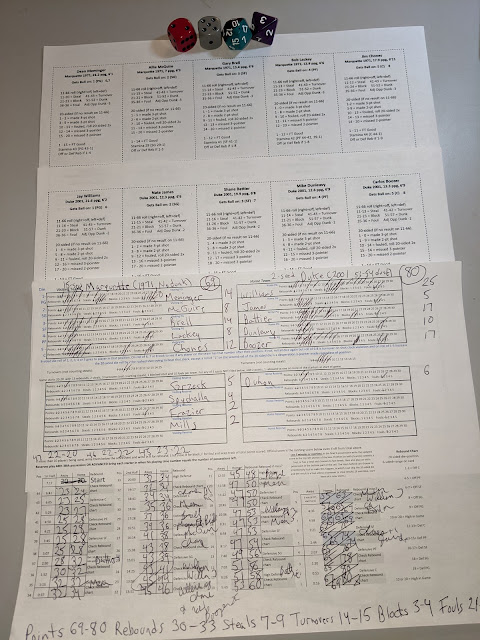 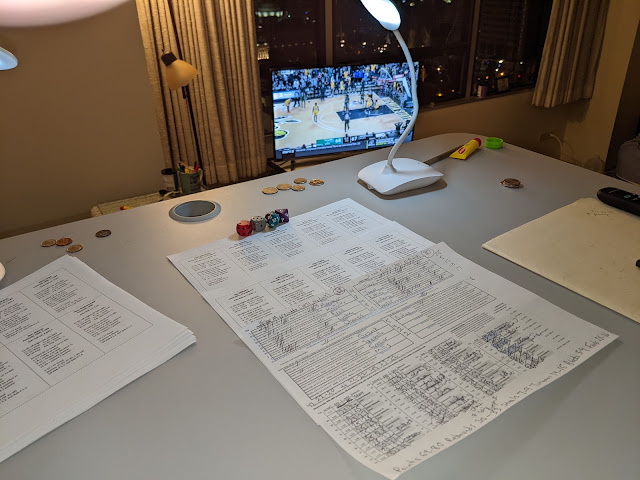 Posted by JohnPudner at 9:11 PM