Here are the options we laid out for brackets - fully admitting that even the best sports analyst at MIT admit at conference the systems really don't work on a single game elimination. You can click on the piece and the options here.

Obviously, Value Add Basketball is an analytical tool to measure past performance and not a predictor of the future, but you can't help filling out brackets to capture the one time people are paying attention! 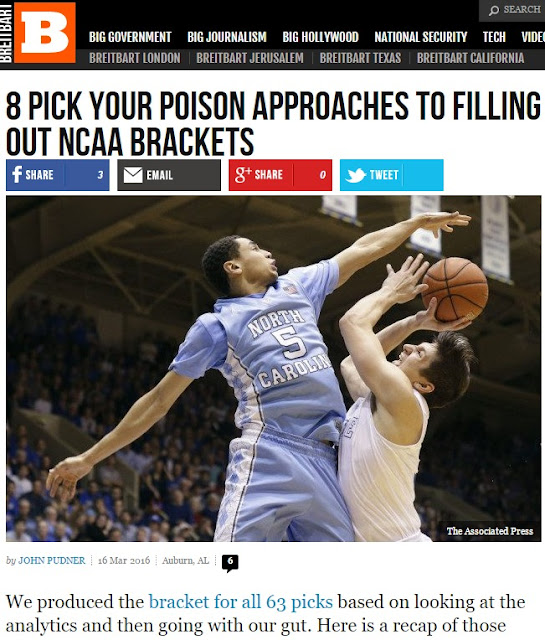 Posted by JohnPudner at 9:52 AM No comments:

If you just want a visual of the filled in Fox Sports bracket scroll to the bottom of the post, or you can go to the table and fill in each team on the number of lines indicated.

In the table, the number of bracket lines (wins) recommended for each team is followed by the overall Bracket Rating, then by their Sagarin Rating, if they are hot or cold (see Breitbart Story), how many points they will lose or gain based on the Value Add of injured or returning players, the number of likely NBA players on their team, how much they rely on experienced point guards and if they have the All-American or at least All-Conference players to take them to a title. Explanations of each follow at the bottom. 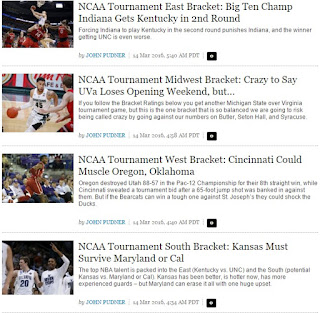 You can click on my analysis of the Midwest, East, South and West brackets - which appear in Breitbart Sports.

The Sagarin Rating is how many points the team is better or worse than an opponent (if a team with an 86 plays a team with a 76, they should win by 10 points). The top teams based purely on how well the teams have played this season are Michigan State and Kansas at 93, and UNC, Virginia, Villanova and West Virginia all one point behind at 92.

The "Hot" rating indicates how much a team has been improving or fading over the past few weeks, primary at www.kenpom.com. The hottest team going into the tournament is Stephen F. Austin (+4) followed by Michigan State, Oregon, Seton Hall, Yale and Northern Iowa all at +3.

The "Healthy" rating is a negative if a team is missing players (Oregon State and Michigan are missing key players), but it also indicates the teams that have key players back who missed parts of the season - thus making the team better now than their overall rating (Texas +3.1, Dayton +2.2, Michigan State +2.0 due to missing Valentine for several games, Utah +2.0 and South Dakota State +2.0. The list of players impact this rating were covered in a Breitbart Sports story.

The "Experienced Point Guard" indicates whether or not the team's top players are experienced guards particularly point guards, who can handle the pressure when things are not going well in the tournament. Oklahoma is the best in this regard with senior and Breitbart Sports National Player of the Year Buddy Hield and their second and third best players both being experienced point guards. They have a +1.8, while four teams have a 1.3 (Miami of Florida, Wichita State, UC Irvine and BYU). A team whose top players are all experienced front line players would have a 0.0.

The All-American rating is based on having the go-to players from the Breitbart Sports All-American team or at least an All-Conference posted here. A first team All-American like Denzil Valentine of Michigan State is worth 1.8 points, while Kentucky (3.0) has a second and fourth team All-American for the top spot. All-Conference players are worth much less, but Al McGuire's old saying that a team needs three and a half stars to win a title points to schools like Kansas (two All-Americans and one more All-Big 12 selection) as a contender. 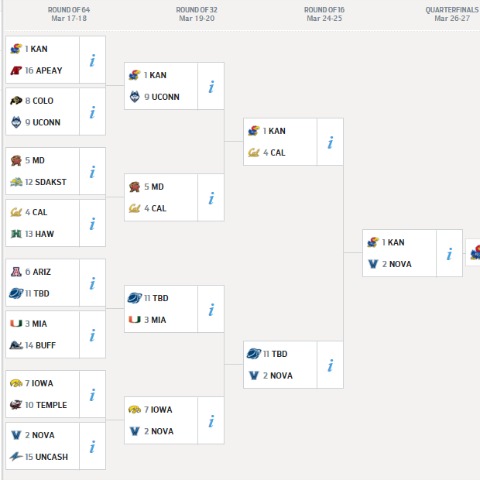 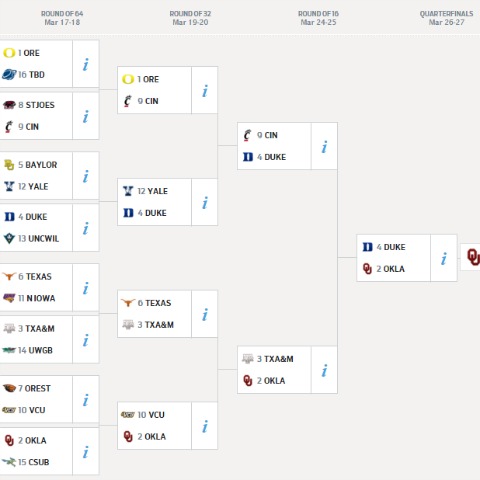 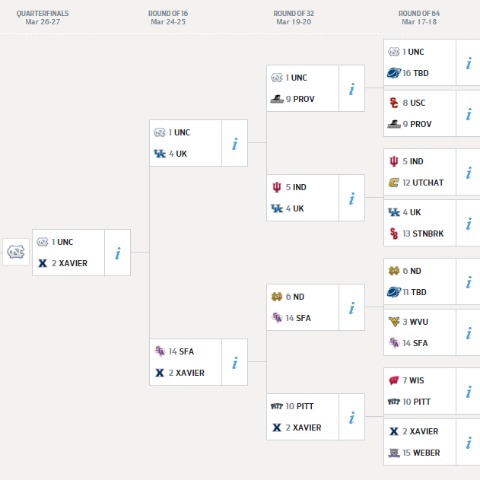 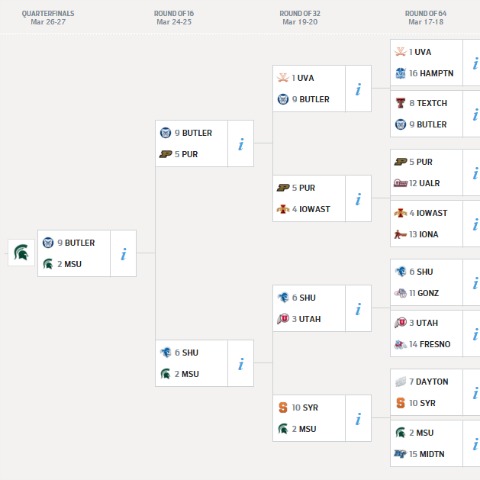 Posted by JohnPudner at 2:16 PM No comments: 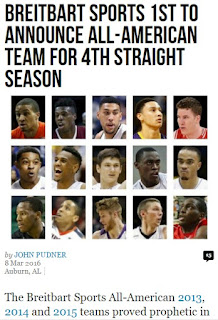 Posted by JohnPudner at 12:12 AM No comments:

While I believe Value Add Basketball is the best objective measure of how many points each college player is worth to his team, I am also a Bill James disciple who realizes you always want to weigh subjective observation against objective analytics. Therefore each year I look for a couple of sources of objective observation from sources who give a comprehensive list that I can use to weigh against analytics for a final evaluation. Here are the two I picked this year that seem to be the most complete.

Sam Vecenie of CBS Sports ran the most thorough evaluation of the top 100 (plus one) players as the season unfolded. We gave his top player (Buddy Hield) 3.00 points, then Denzel Valentine 2.98, all the way down to St. Joe's Isaiah Miles getting 1.00 for finishing 101st.

In addition, the player who won the National Player of the week for the Power Conferences that player received an extra three points. The top player in the country from the "High Majors" on the site (the former Mid-Majors) received two points, and the best player from the smaller conferences (now referred to as Mid-Majors) received one point, and any player to win at least one of the above received an extra 0.5.

Buddy Hield won Big 12 Player of the Week three of 10 weeks, and in two of those cases he was also National Player of the Year to get 2.75 total points.

When we tally the points accumulated for Conference Player of the Week Awards and making the CBS Sports Top 101 list, these are the totals. Those figures are added to the objective www.valueaddbasketball.com ratings to choose the All-American and All-Conference teams.


Posted by JohnPudner at 5:18 PM No comments:

Continue to follow March Madness through my pieces on Breitbart Sports, but our final post on this table is being made Saturday, March 12 at 9 p.m.

We introduced this table in a story Saturday morning March 5, and we continue to update the table at the bottom of this post on the breakdown of the college basketball teams. On March 13, a total of 68 teams will be in the tournament as an "A" or a "B" and 283 will be left out as an "F" or a "G.

With Selection Sunday upon us, we post our final update as of 9 p.m. on Saturday, March 12 at 9 p.m. As we post, there are 110 teams still technically alive for the 68 spots - though we are being generous on "C" and "C-" and "D" teams who actually will almost all be fighting for NIT and other tournament spots. The tournament championships to be completed after this writing (not counting the games like UNC vs. UVa where both teams will make it) are:

So if this were to actually play out in this order after the winners from above, then no C, C- or D team would make it. These letter grades are not based on an in depth bubble analysis, but rather based on the team's anticipated final RPI going into their tournaments:

"G" teams - indicating they were not eligible for the tournament due to either just moving up to D1 or due to a violation.

"F" teams - indicating they were eliminated from their conference tournament and have no chance at an automatic bid.

"E" teams - indicating they can still get an automatic bid if they win their conference tournament, but have no chance once they are eliminated.

"D" teams - indicating they will need to win their tournament even though they are good enough that they should get consideration. The best two of these going into the tournament this season were South Dakota State (projected RPI of 30) and IPFW (Indiana University–Purdue University Fort Wayne, 60) of the Summit League, which is expected to finish with the 11th best conference RPI and one of the best attended tournaments.

"C" teams - indicate teams that are on the bubble and could get a bid even if they do not win the tournament. We also broke down the "C" "bubble teams into the probably in "C+", true bubble "C" and probably out "C-."

"A" teams - which is a team's code once they win the tournament and get a bid. Chattanooga won the Southern title late Monday night to become the best team in so far - with a projected RPI of 49.

You can search for your college here to see where they fall: