The Mets hqd the advantage with their top two starters (deGrom and Stroman) facing the 3rd and 4th BoSox starters (Richards and Perez). However, They barely survived the Red Sox top of the lineup. Verdugo led off and went 5 of 9 including a second game grandslam to cut the Mets lead to 6-5 and 2-run homer to cut it to 8-7 in the No. 2 spot.

However  cleanup Devers' nightmare series in the field cost the Red Sox both games. He had 2 errors and failed to come up woth the ball on three clutch defensive plays. 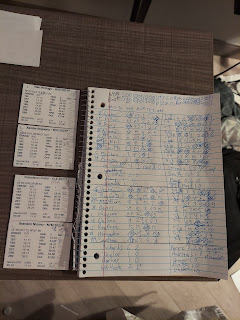 Posted by JohnPudner at 8:25 AM No comments:

One reason we wanted to play one Statis-Pro series with each AL team is to go through each roster to see any additional player cards for all 30 teams. Here is a guide to use the table below to find the correct player car whatever baseball board game you play and get them on their current team.

CARDS TO PRINT AND USE. You can find a Statis-Pro player card based on his 2021 projected stats for any of 768 players with a team name in the third column ("card") and under the next "use" column the word "yes" appears to indicate we are using his cards in our games because he is playing. Click for their batter card or their pitcher card. If you have a set of 2020 cards for Statis-Pro Advanced, APBA, Strat-o-matic or others, there is probably a strong overlaps between the cards you and the team their card was for last year and the list below, so use this as a reference to get players on their current team.

ADJUSTMENTS TO CARDS ABOVE. If you want to have an even more realistic 2021 performance, you can also click on this blog for a list of players who are playing substantially better or worse than their projections for the season, and our suggested card adjustment to their cards. We do list a plus or minus for each adjusted player, but I will leave it up to APBA and Strat-o-matic players to decide if a "much better" is worth a letter grade improvement for APBA pitchers, etc.

PLAYERS NOT PLAYING IN FORSEEABLE FUTURE. On the table below, we also list 48 players for whom their is a card, but we are not using in the game because their return is questionable. In this case the card column still lists a team name, but the word "no" appears in the next column. This can be a player like Justin Verlander with a long-term injury, or a player we pulled from our game due to facing legal concerns that might prevent his return like Marcel Ozuna, or a player who has just been in the minors almost all year. We keep players in our game if they are just out for a short-term injury that has them on a 10-day disabled list or they are bouncing back and forth between the majors and minors.

FRINGE PLAYERS WHO NEED A TEMPORARY CARD. For another 110 players on the table below, you will see the word "fringe" instead of a team name in the card (3rd) column. In that case a card was not made, but the player is playing a substantial amount for the team this year. In many cases this is a player who just broke through from the minors, or in other cases a players skipped last year due to Covid-19 or in another case Ryan Zimmerman actually retired after the 2019 World Series title but then decided to come back this season. In Statis-Pro we base a temporary cards on the players OPS (a .750 OPS has a home run range of 26-31 and you add or subtract one home run number from the range for every .050 points higher or lower) or ERA (a 4.00 ERA is the average PB 4-7 card, and then one better or worse for every 0.50 points higher or lower - so 3.50 = PB 2-7 and 4.50 = PB 2-6). For every 100 plate appearances for a batter, if he has at least 10 steals the OBR/SP is A/AA, at least 8 steals per 100 PA is A/A, then 6 steals per 100 is B/B, 3 steals per 100 equals C/C, any steals equals D/D and no steals = D/E.

If playing APBA, Strat-o-matic or other board games I'd suggest finding some standard cards you are not using to find a card with a similar OPS to use for the new player.

We hope this list gives you a quick reference to make whatever baseball game you play fun and not run out of pitchers or even pinch hitters if you go extra innings.

Key to Columns:
Name - we list in order of first name within each team.
Team - the team abbreviation appears right after each player for the team on which he played as of June 27.
Card - the next column lists the card we are using in the game and that you can use to play. In most cases the same team is listed, and that just means the player was with the same team shortly after the 2020 season ended and we produced the 2021 projected cards. In those cases you can just use that card, and if you want a recent blog suggested slight adjustments based on a player having a much better or much worse season. If a different team is listed, then the player was on a different team and you can look for their card with that team if searching our pitchers and batters pdf of player cards.
Use - lets you know if we are using the player card in our game or not, in case you want to do the same. Only 42 cards have "no" here, and these are all cases in which we have a player card but we are not using it for one of a few reasons; 1) the player has mainly played in the minors this year, or 2) the player is on DL or suspended and it is not clear if he will return in the forseeable future.
PA/TBF - this is an apples-to-apples for both batters and pitchers to give you an idea of how much each player has played and if you should make a point of using them in your games or not. PA indicates how many times a batter has come to the plate this season, and TBF is total batters faced for a pitcher, the same figure.
SB,IP/G - the next column indicates how many stolen bases batter has this season, or hope many innings a pitcher averages pitching in most games. These may not seem like the most important stats to include, but they are for making player cards. For batters, the speed component is the OBR/SP rating (on-base running and basestealing), so the steals compared to total plate appearances listed in the previous column give an idea for those ratings. Pitchers in Statis-Pro have endurance ratings of SR/RR, and knowing their average innings pitched at least gives an idea of how long you should realistically leave them in a game (or APBA, Strato-Matic or any other game you play).
OPS/ERA - in previous blogs we showed the quick player cards we make for batters, with home run ranges adjusted based on their OPS (on-base percentage plus slugging percentage), and for pitchers, with their PB rate adjusted by their ERA with 2-digits.  We suggest some variation of this for other board games, so you can add new players to have enough on the roster to keep games fun, but not need to go through the calculations to precisely figure out every new player on the roster. We listed these stats for the players for whom we have players to give you a comparison.
Posted by JohnPudner at 2:20 AM No comments: