The 136 all-time great basketball teams are updated and can be printed out by clicking on this pdf, or on this google doc. They are also added to the free game. Here is the google sheet of all games played to date and ranking of the 136 All-Time Great teams in the game.

In addition to the big tournament between the original 96 teams we created (won by Bill Walton's UCLA against Michael Jordan's North Carolina), all 30 teams we created next have played at least one game in our ongoing second tournament, with Kareem's UCLA and Jay Williams Duke the top two seeds already in the Elite 8.

We then created two more teams from the past two years - from 2021 Baylor, Colorado, Iowa and USC, and from 2020 Dayton. To give them all a first game against another opponent NOT from the last two years, we created two additional teams (BYU 1981 and Marquette 2011), realized we had not included Dayton 1967 in either of the two previous tournament, and we flipped Illinois 1989 with Baylor 2021 to each others tournaments to end up with this line-up.

Once these 8 teams have played their first round games, all 136 teams will have played at least one game so we should have caught and fixed any little mistakes (such as listing what possessions we suggest each player is on the court). 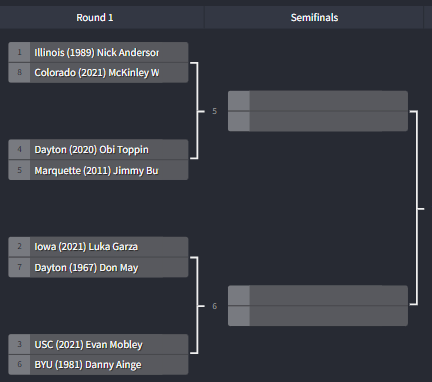 Posted by JohnPudner at 4:09 PM