Notice - on January 17 we will start updating current player ratings at www.valueaddbasketball.com every few days. Until then, here are the historic game.

The UNC team that Frank McGuire took all the way to the 1957 title as the second undefeated champ took a 52-51 lead behind star Lennie Rosenbluth.

However, Greg Nelson hit a 3-pointer to give Jacksonville the lead 54-52 and Artis Gilmore (25 points, 13 rebounds) took over the rest of the way for a 89-76 win to advance to the tournament's Sweet 16.

Gilmore did not get a title with Jacksonville because they played during UCLA's run to a 4th straight title, but they made that title game with a win over #1 Kentucky in the Elite 8 and the #3 Bonnie's.

Note on Jacksonville's cards have a line indicating their games use and extra 10 possessions due to their fast pace. Both Vaughn Wedeking and Rex Morgan have the highest steal range possible (11-20) and in this game they won the steals 14-4 in the game.

Both teams were great rebounding teams and pounded the offensive boards for an incredible 90 total rebounds in the game - Jacksonville with the 46-44 edge. 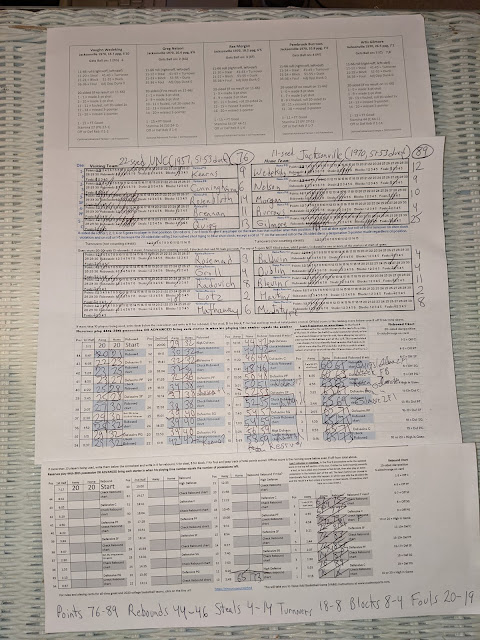