Click here for the full story breaking down the 36 colleges that produce 47.3% of all NBA talent, and their projected records if they played as one NBA team. 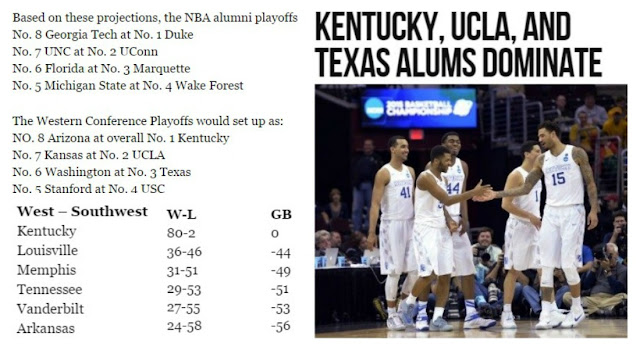 That story is one of my stories for Breitbart, and the large table with breakdown of how many wins each player from these 36 colleges would add to his team appears here in an earlier Best Returning Players Post. The projections are based on Value Add Basketball and Hollinger's Estimated Wins Added (EWA).
Posted by JohnPudner at 6:51 AM No comments:

Calculating records of 36 colleges with a complete NBA alumni roster

After laying out the calculation of additional wins of all NBA Players in the previous post, If we go the next step and rank all NBA players by the same method and then group them by their colleges, we have 27 colleges that could put a starting five on the court. When we add D-League players we get to a perfectly round 36 colleges.

Better yet, these 36 fall pretty nicely into the six current NBA Divisions, going with six colleges each Division. Using ESPN's Extra Wins formula for current NBA players and Value Add Basketball's ranking minus two for each player coming out of college this year, we give each college credit for the number of extra wins each of their top five NBA players delivered in 2016. If they have more than five NBA players we give half credit for the next best five players from the college, but any beyond 10 from one college are not counted.

Here are the final records we would expect from all 36 NBA players teams of current college players, and each players estimated win value in that division. At the bottom of the table the resultant playoff match-ups are listed:

The additional wins a team can expect from drafting or trading for an impact player can be measured by referring to this chart. We follow only the 148 players who played at a level worth at least four additional wins to an NBA team over what a replacement player would have done, based on:

The Boston Celtics, Golden State Warriors and Chicago Bulls are the three teams who have improved by at least 15 games based on these analytics, but of course the Warriors cannot really improve that much with Kevin Durant since they were already 73-9. Click here for on John Pudner's stories on Breitbart Sports for team breakdowns and other updates.