Here we go with another fun culmination of a Statis-Pro baseball seasons. I don't know if the Houston Astros and Washington Nationals will survive tough pitching challenges in Game 5 of their playoff series - but with that as the backdrop I started playing them against each other after they emerged from the Statis-Pro season and playoffs - which lets teams play with no injuries and with the cards of how good a player projected to be this year.

One big advantage for the Statis-Pro Nats vs. the real Nats is a great bullpen. Not only is Doolittle's card great, but because I set the rosters based on who had pitched by the end of August, they also get to use Rosenthal's great card even though he really was a disaster in only a few appearances for them this year before being cut. Nonetheless, he wrapped up a tight win for them in Game 1, before Verlander and Corbin both were - well as bad as their actual most recent appearances were in the playoffs - with both gone by the time the score was 6-5 in the 5th and the Astros eventually wrapping up the Game 2 win to even the series and head back to Houston with Alvarez back in the line-up as the DH. (we will keep adding game below as they conclude). 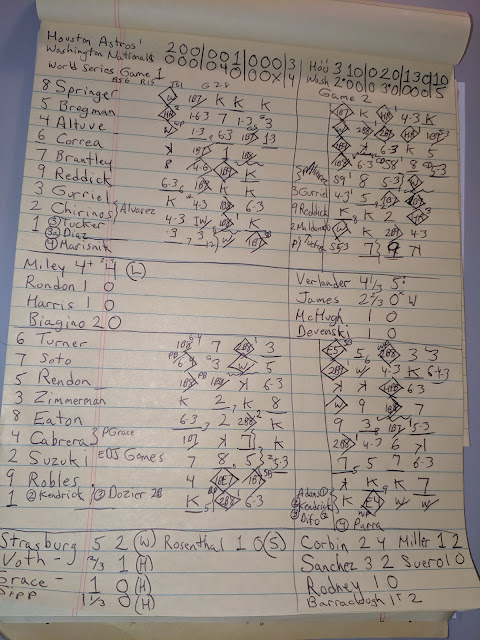 Games 3 through 5 in Houston 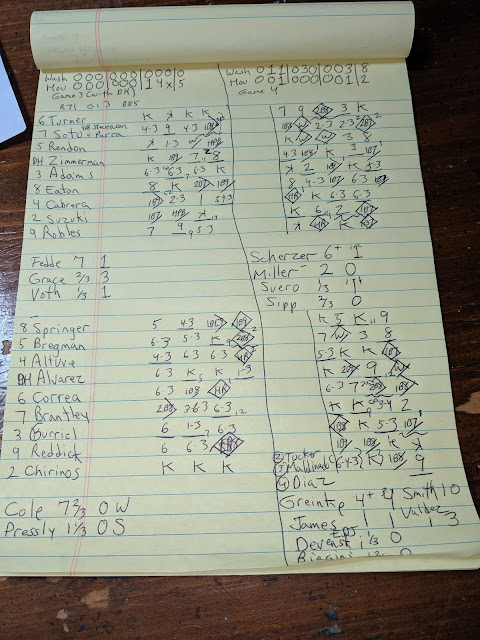 Both teams won with the pitching edge to split games 3 and 4 and keep the series even. Game 3 - Astros 5, Nationals 0. The Astros won 5-0 behind Cole, but used their best relief card in Pressley for the save because they led only 1-0 in the top of the 8th when Soto knocked him out of the game and then pinch runner Stevenson stole second. Correa's Homer broke the tie, and then Altuve's Homer capped a 4-run rally with a 2-run Homer. GAME 4 - Nationals 8, Astros 2. Scherzer pitched out of a couple of jams to last for 6 innings with a 5-1 lead, and the Nats pounded out 11 hits for the win. The Nats disadvantage is that they needed Scherzer - the best pitching card in the game - for Game 5 of the NLCS so his only start of the Statis-pro World Series was this game 4. However, he can do long relief if needed in Game 7.

The Statis-Pro World Series started with the real MLB season still in the divisional round with the Nats and Astros still hoping to make the 2nd round. By the time we played game 5 below, the real Nats were up 2 games to 0 on the Cards but the Astros had been blasted 7-0 in Game 1 with the Yankees).

Strasburg took a 2-1 lead into Game 5, but Springer and Altuve hit solo homers off him to give the Astros the lead. The Nats sluggers chased Osuna in the 8th with a Rendon double and singles by Zimmerman and Adams, but Pressley (the Astros best card as a PB 2-8) came into strike out the final two to keep it 3-3. Fielding was then key. Maldanado, the better defensive catcher with a throwing arm A (TA) lined an apparent game-winning double over the first base bag only to have Adams (a clutch defense 4 who plays first to move Zimmerman to DH) made a diving catch. After Robles singled in the top of the 9th, Maldanado returned the favor by throwing him out on a play on which Robles would have stolen second if Chironos (TB) were still in the game. Springer then led off the bottom of the 9th with a solo off Doolittle to give the Astros a 4-3 win and three games to two lead with a chance to clinch in Washington. The Astros cleanup hitter Alvarez will sit with the pitchers hitting - Alvarez is DH and has the worst error rating - E10 - if he plays the outfield. 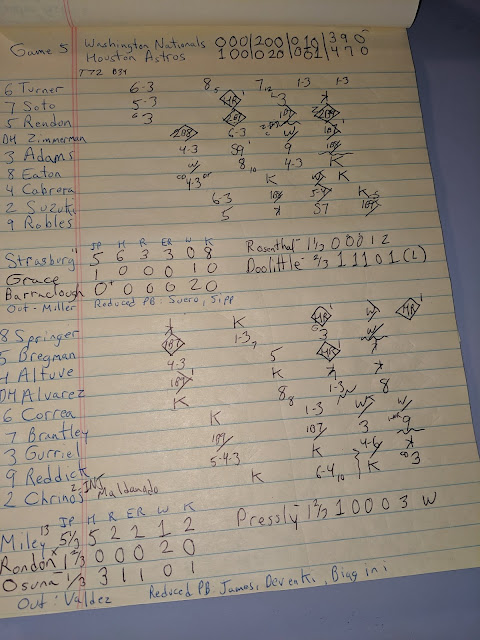 If you happened to watch the last 2 games of the actual MLB playoffs between the Cardinals and Braves then the end of the Statis-pro World Series was deja Vu. The Statis-Pro Nats, like the real life Braves, had a chance to win their last road game of the series until it slipped away at the end. In the Statis-pro series Springer hit a.walkoff Homer in the bottom of the 9th just as the Cards rallies at the end.

Like the Cardinals in real life, the Astros then clinched their series with an unbelievable explosion in the next game. For the real-life Cardinals it was a record 10-run top of the first to put away the Braves - and in the Astros case it took three innings to take the 10-0 lead en route to a 15-0 win for the 2019 Statis-Pro World Series title.

Springer had the Astros first and final (19th) hit - starting the game with a double and then finishing the scoring with a 2-run Homer to make the final 15-0. To show just how far the cards were breaking in the Astros favor - Verlander gets hits on only 4 of a 64 possible random numbers from 11-88 - and in his first three at bats a "14" - his only extra base hit - came up twice for doubles and a "12" came up once for a single (when pitchers bat then the opposing pitchers PB is not factored and most AL pitchers have the same 11-14 hits while most NL starters get hits from 11-16.) 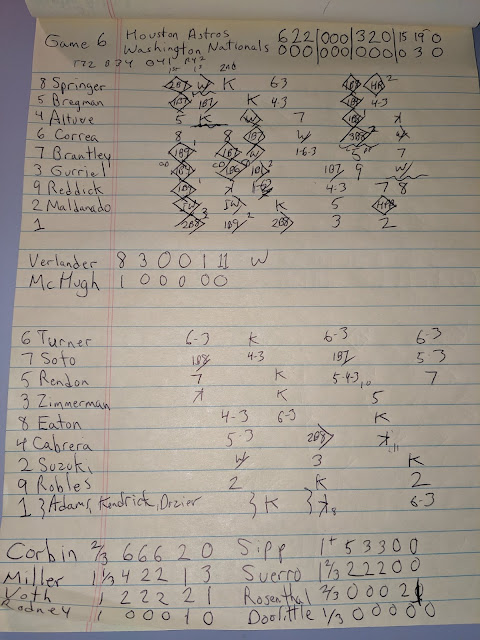 After watching Springer's 3 homers in these Games 5 and 6 to hand the Astros their second Wold Series win in four Statis-pro seasons played on Sunday afternoon, I then tuned into their actual Game 2 against the Yankees only to see Springer hit a real life Homer before Carlos Correa hit a walk off Homer in the 11th.

While Corbin was destroyed twice in the series despite a solid on 2-8 card, it should be noted that the Astros went 39-11 against lefty starters in real MLB play this year, the best record against lefty starters since the 1950s. However, after looking at the splits on the 1984 Tigers in Statis-Pro Advanced, I believe they have the best lineup ever against lefties and the 1927 Yankees the best against righties.

Astros are Statis-Pro champs a.year after the Indians bumped them.


GAME 7 (not necessary) - Fedde vs Cole (Scherzer and Greinke available for long relief with half starters endurance - in Washington, pitchers hit)

With 8 major college football teams winning blowouts Saturday to stay undefeated, MLB quietly hoping the Dodgers can hold of the Nations tonight en route to a Yankees-Dodgers World Series, and my first running of Value Add Basketball projections showing the great Chris Mack has Louisville back on top in just his second year since a great Xavier career, this is the best sports time of year for me. (updates to this info at this blog)

My quick headlines with links to each sport:

Baseball: While the Dodgers are favorites to win the NL for the third time with Cy Young candidate Hyun-Jin Ryu on the mound tonight against the Nationals, in my simulated (free) Statis-Pro game the Dodgers won a record straight 17 games only to be upset by the Braves who in turn lost in 7 games to the Nats. That Nats and Astros cards in the game are actually slightly better than the Dodgers and Yanks with three great starters (like the Dodgers) and incredible line-ups (like the Yankees). The Astros ended up ties with the Yanks in my simulated season, but edged them in the real regular season and in my playoffs as the Astros today joined the Nats in my Statis-Pro World Series. Still, MLB's dream of a ratings bonanza Yankees vs. Dodgers is just as likely in the reason game. Click for free game and player cards to play your own, or accounts of how simulated games played out for a the Nats-Astros World Series.

Basketball: This weekend I calculated the projected values of 3,725 college basketball players for the upcoming season and as always invite all of the Sports Information Directors and sports writers on this list to please make notes on this Master Google Sheet of 2020 Projections.  When I first put these out this time of year seven years ago, the great Eamonn Brennan (now at the Athletic) wrote on ESPN: "When you think about the intersection of advanced sports statistics and political forecasting, you think of Nate Silver. Far fewer people will know the name John Pudner, but college hoops fans probably should." It is great to see Chris Mack, who I've interviewed many times at Madison Square Garden during Big East Tournaments, has already assembled the best talent in the country nudging out No. 2 Duke on the team tab). Click for player projections on any of 353 college teams and feel free to make any corrections, click here for past years, or here for the free game of 48 great all-time teams, and notes on how we project NBA prospects, JUCOs etc.

Football: So it is not the best weekend to be in Auburn, but hey with an 18 year old quarterback even the fall to No. 12 points to a great future. Also, the Penn State team I traveled to see play Pitt (see blog with Tony Dorsett in front of our seats) has now outscored Big Ten opponents 94-7 to emerge as one of eight major undefeated teams making the case to dethrone defending champion Clemson.

Sure there are other things going on - from the new national sport of politics engaging such strong emotions to family sports with two of my children part of the big cross country season at South Alabama. This is why sports can be such a great escape. Even while we try to solve major and serious issues while remaining calm. I hope we can all work like ducks - frantically working like the duck's non-stop kicking under the water to stay afloat with the outside appearance of calm (as in being civil). Click here for recent Fox Ohio TV.

Take a break to enjoy family, friends and some sports (or whatever your leisure is) in between solving problems. 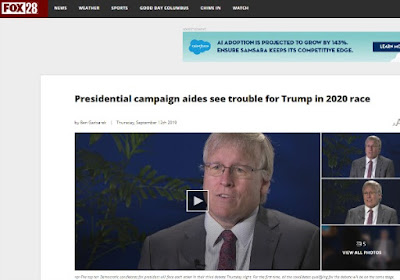 Posted by JohnPudner at 1:46 PM No comments:

Projecting the JUCOs and NBA Stars based on NBADraft.net and JUCORecruiting.com

While the vast majority of the projections at www.valueaddbasketball.com are based on the normal improvement of players based on their class and rankings from the previous year, I follow Bill James in the belief that you can account for the opinions of experts as well. Noone knows the NBA prospects better than Aran Smith, or the Junior College players better than Brad Wilton.

Players who Aran Smith (NBADraft.net) says are top 20 prospects average about a 9.24 ValueAdd, the rest of the players he in the top 20 will average being about a point worse, etc. all the way down the chart to the ones he lists as an honorable mention in class rankings might be worth as little as 2 points a game in college. I use his rankings in my projections to create an "alternate minimum" projection. If a players Value Add was only 1.0 in a terrible freshman year, but he is a top 30 prospect according to Aron, then I give him 70% of the average or a 5.1 projection. In most cases the player's projection is already higher than the minimum listed and they just keep their ranking.


Likewise, the six JUCO players Brad Wilton ranks as the best can routinely give teams a Value Add of 4.0 to 6.5, or occasionally you even get an All-American like Jae Crowder. Below are ratings I assign the players he says are the best of the 2019 JUCOs, though I admit I sometimes am unclear if there is a way to tell what player might not be available until next season.


Posted by JohnPudner at 4:33 PM No comments: