Our first 2021 Value Add Basketball Game player cards will be used in a game. We have substituted the 2021 National Champions from Baylor into our current tournament as the No. 7 seed in place of Nick Anderson's 1989 Illinois team.

In recent blogs we announced we added four teams from 2021 as well as Obi Toppin's 2000 Dayton squad to bring our total to 134 Great All-Time teams. It turned out Baylor and the 1989 Illinois squad were tied for 34th in our simulated KenPom Ratings, and since Illinois had yet to play their opener against Orlando Woolridge's 1981 Notre Dame team, we discovered that the Challong.com site I use to set up my brackets does allow you to edit teams in a bracket that have yet to play we subbed them in as an equal level replacement.

Below is the new bracket. As the 7-seed, a Baylor win would mean the top seven seeds will all play in Round 2. However, because of many upsets in other games, a Notre Dame win would mean the worse seeds would be 6-5 in the tournament to date. In our original tournament of 96 teams the favorites 63-32. 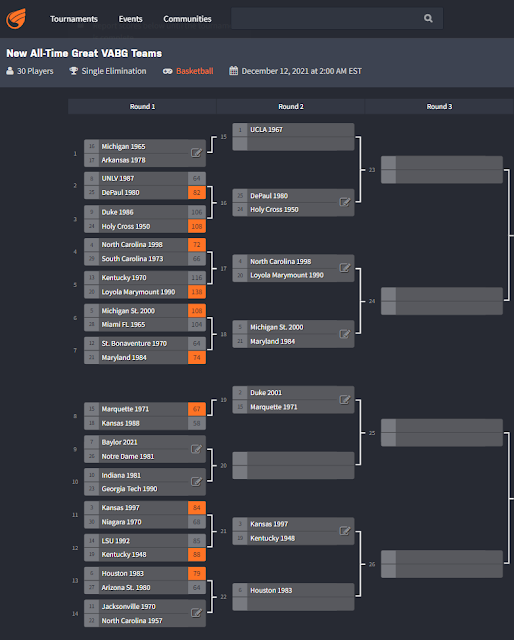 Posted by JohnPudner at 9:08 AM