Yes, I'm watching the NFL playoffs. I actually find it easier to PLAY a different sport in a board game then I am watching on TV to avoid confusion. So while Dax tried to bring the Cowboys back against the 49ers ...

The new we created from the past two seasons have now won four straight against the additional teams we created from past years. A couple of notes for those who have already been playing the Value Add Basketball Game and want to focus on rotating players in and out.

First of all, you do not need to do this - the basic way to play the game is to play the subs across the bottom row for the first 7 possessions (44 to 38 on the scoresheet) and then play the starters (top row) for the final 37 possessions of the game. However, here are some tips on what I've found easiest to track who is in the game if you want to play everyone the right number of possessions (the Stamina number).

1. To take a tough case, Illinois is one of the very high possession teams that add 4 possessions to the normal 44 we play (if you want to play this advanced rule). If you look at the scoresheet further down, we list the score after possessions 48, 47, 46 and 45 before the normal sheet. When we play extra possessions because of a team like this, I simply play the reserves for half the possessions (so the bottom rows for both Illinois and Colorado below played against each other the 48th and 47th possessions) then the top row played the 46th and 45th.

2. Once we hit the normal start of the game - the 44th possession - Colorado had exploded to a 29-23 lead rather than starting at the normal 20-20 start. The two pictures below show which players I had in the game for that 44th possession, based on the suggested playing possessions I put on the bottom of each card. Note for example that McKinley Wright, Colorado's unheralded super star, plays Point Guard on possessions 43-1, meaning this 44th possession is the only possession for which he is NOT in the game. For Illinois, four of five starters were already in the game.n the game.

PENNIES. The way I do it is use a penny if the player only gets the ball on one number (so on the 8-sided die I just go in order and give it to the player left to right on 1, 2, 3, 4, 5) so the backup point guard Bardo would get it on a "1" on this possession for Illinois.

DIMES. I put a dime on each player who has an extra number after "Gets Ball On" and his possession, then just go left to right on the dimes for the 6, 7 and 8. So for Colorado below with the 5 subs all in for this possession, a 6 would go to Barthelemy with the dime furthest left, then a 7 would go to Walker in the middle with the second dime, then an 8 would go to Walton at the far right.

All that being said and the great McKinley Wright pulled a huge upset after really being the incredible but overlooked point guard in the country. He scored 21 points and took Colorado to a double digit lead with 5:43 left minutes left - 76-63.

Illinois went to a 3-point strategy the last 5 minutes (add a 3-point shot made for every 2-point shot you take off from the top of the range, but you can go no more than double the original 3-pointers made) and subbed in their best 3-point shooter PJ Bowman for Kenny Battle who makes no 3-pointers.

That means Bowman was still just the 1-5 three-point range on his card, because you need to take away a 2-pointer made at the top of the range to add a 3-pointers at the bottom of the 2-point range, so with only one 2-pointer made (6-6) he had no place to add any more. However, Gill's 1-3 three-point range could be doubled to 1-6 made by taking away three 3-pointers so 8-10 went from a made 2-pointer to a missed 3-pointer. The system worked and both hit 3-pointers in a furious 21-8 run to cut it to 84-81 with 16 second left, but Colorado center Evan Battey dunked to finalize the Colorado upset. 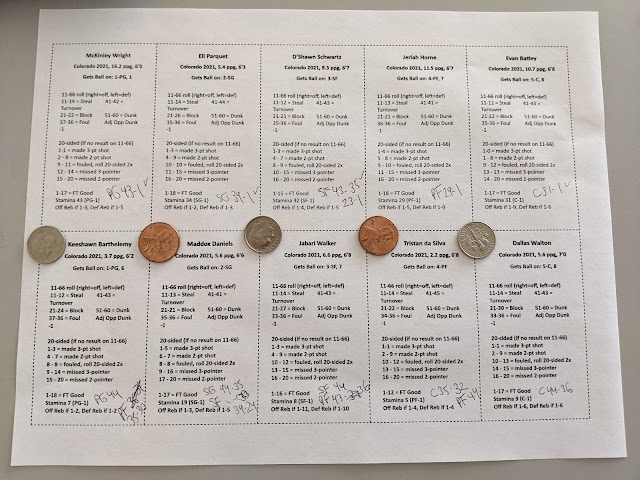 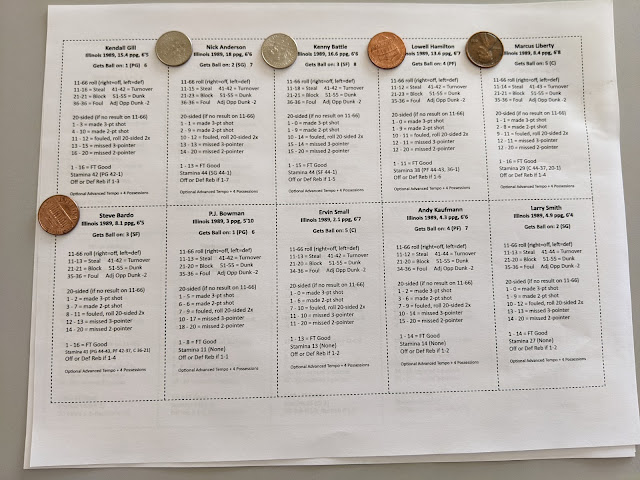 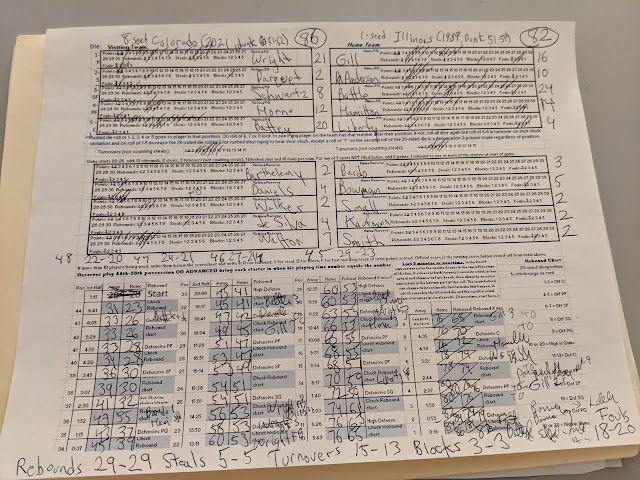 Posted by JohnPudner at 4:03 PM