There is one team for each city in which a franchise played - so a Boston Braves, Milwaukee Braves and Atlanta Braves. I tried not to do more than two from each - but did end up with four Yankees teams. Here is the rough map of divisions, then list of all teams below. 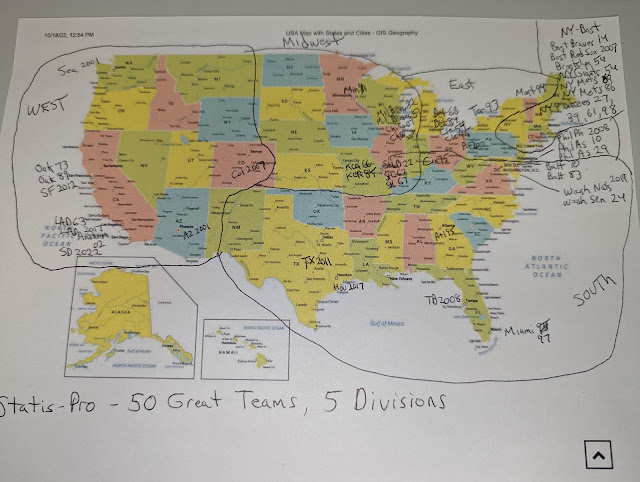 By the list of teams I list the League ERA that year, then home run adjustment info. From 2017 to 2021 the average Statis-Pro Cards had just over 4 home run numbers for the first time in history. From 1907 - 1918 half the seasons the average batter had no home run numbers.

The deep range (where a ball can be a homer or can be caught for a deep fly out) balances that out. A player from one of the homer years has 3 of his homers taken away and turned to DEEP, while a player in one of those early dead ball years gets all his homers plus the next three numbers after his hits as DEEP.

When playing with deadball as the home park-era, only 11-18 on a deep drive is a homer, while in a recent homer era a 11-78 leaves the park - which pretty much balances out the edge the live ball era team would have and gives you an idea of how good a player was no matter the era.

Here are the teams by division.

Posted by JohnPudner at 2:17 PM