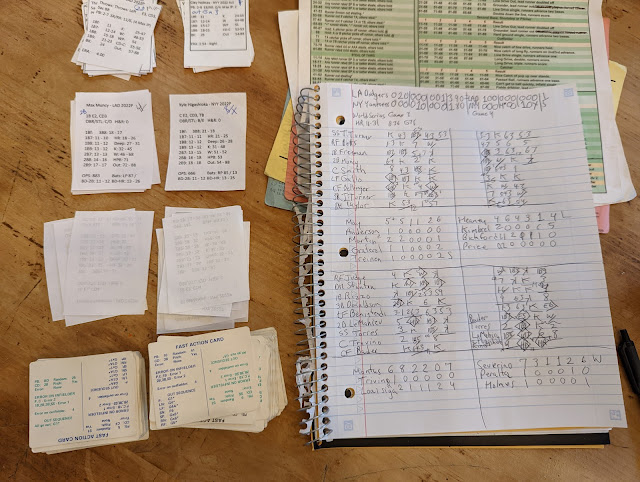 The Dodgers did hold onto win the rain delayed first game of the day 3-1 to take a 3 games to 0 edge inhe Statis-Pro World Series.

However, the Yankees took advantage of a big pitching edge in Game 4 with Luis Severino, a PB 2-8 activated late in season, taking the mound and delivering a beautiful 7 inning gem in a 5-1 win to force a Game 5 in Yankee Stadium (home run 11-31, deep fly out,.runners advance 32-88).

Ironically all 3 hits allowed were back-to-back-to-back in the first inning by Freeman, Muncy and Smith to make it 1-0 Yankees.

The Dodgers were at a disadvantage with PB 4-7 (allows action on the batters card 50% of the time) lefty Andrew Heaney put in the rotation due to Buehler's 60+day DL. We use cards as long as the players are on the roster - even if actually in the minors like David Price - unless they go 60 day DL or are out for the season.

The grandslam occurred after a PB card of 3, with Higashioka batting only because a lefty was pitching. While his OPS below .700, but 85/13 means against lefties (left number) an 85-88 changes from an out to a single, while the 13 means against righties an 11-13 changes from a single to a strikeout - and that adjustment is for both the batter and pitcher card.

The random number of 24 was therefore a grandslam homer.