The new Aaron Judge based on his record-breaking season, and he led off with a homer and later hit a 3-run homer - but it wasn't enough as the White Sox rallied for an 8-5 win to take the first game of a best-of-3.

Verlander, Neris and Pressly combined for a 1-0 shutout of the Twins in the other Wild card Game 1. Mancini walked in the second, went to second on a single by Gurriel, to third on a wild pitch by Gray, and scored on a sac fly by McCormick. In the 5th he preserved the 1-0 lead by throwing out the speedy Gordon trying to score from 2nd on Arraez single.

The Astros Justin Verlander and Yankees David Cole pitch in Game 1s of the actual AL MLB playoffs on the same day as the Statis-Pro playoffs, and the real life results were reverse. In Statis-Pro Verlander went 7 shutout innings while I'm his real game he allowed 10 hits and 6 runs in 4 innings, though Alvarez saved him with a 9th inning homer for the win. In Statis-Pro it was Cole who was knocked out in the 4th after allowing 8 hits and 3 runs, but in his real game he allowed only 1 run in 6.2 innings. 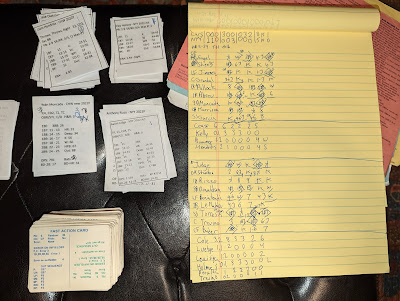 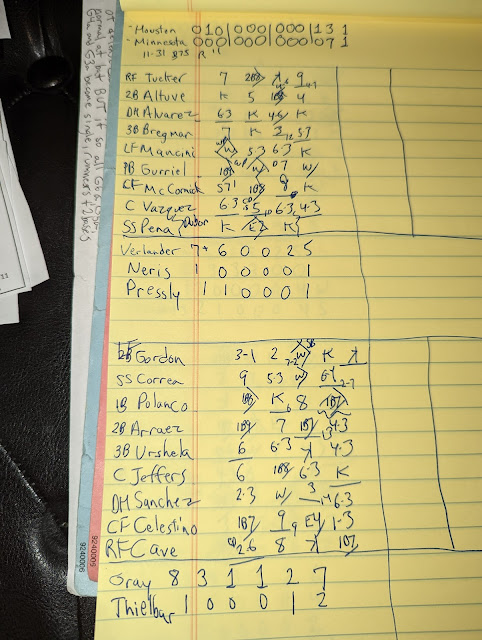 Posted by JohnPudner at 9:31 PM