For our first game with the all-time great Statis-Pro teams (click for batters and pitchers), we matched up two of the greatest all-time pitchers. Greg Maddux leads the 1995 Atlanta Braves into 1924 to face Walter "Big Train" Johnson and his Washington Senators.

While we will leave the Braves batting first in both of the two games, we will treat the first game as being played in 1924 - meaning the home run range on a deep drive is just 11-18 for the dead ball era. In the second game we will play in 1995, meaning 11-58 is a homer. In both years pitchers were batting, so while we list Dwight Smith and Doc Prothro as the DH's in the two line-ups for when the teams visit a DH year/team, they will both be skipped in this game and pitchers will hit.

When the No. 9 spot comes up the standard "pitcher not on list hits" and in those cases we skip the PB and go straight to the standard pitcher's hitting card, on which the pitcher only reaches on an 11-14 (single), 51 (walk) and 52 (hit by pitch). We start the No. 1 and No. 4 starter in one series, then the No. 2 and No. 3 starter in the next, meaning Steve Avery will start the 2nd game. One reason we start him instead of Kent Mercker is that Avery has a separate hitting card and takes a normal at bat that can either be on the pitcher's card or could be a home run on a 13-16 if on Avery's batting card.

Here are the two line-ups and pitchers - and results will follow below.

The Big Train vs Maddux in the dead ball era lived up to expectation, finally won by the 1924 Washington Senators 2-1 in 10 innings on a suicide squeeze.

The 1995 Braves wasted no time scoring in the nightcap. They strung together 6 hits in a row in the first inning to make it 4-0, then pitcher Steve Avery led off the second inning with a homer to make it 5-0. David Justice hit a 2-run homer in the 5th to make it 7-0.

The Braves held in for a 7-2 win, which qualifies as a 3-game sweep due to the 5-run lead after 8 innings, so we start the season with the Braves 4-2 and Senators 2+4. 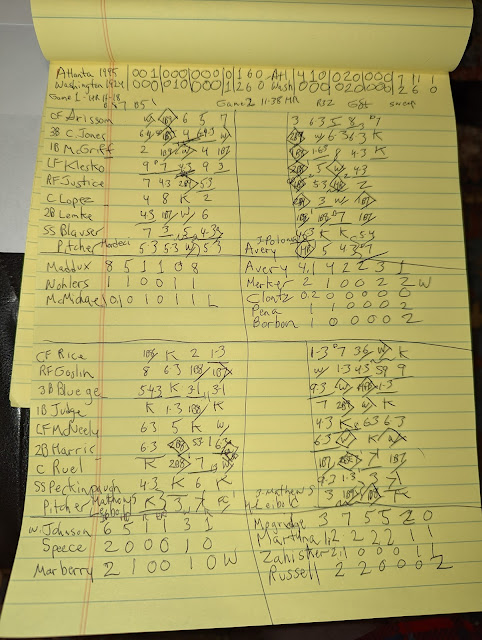 Posted by JohnPudner at 8:37 PM