While we watch Game 2 Dodgers vs Padres, we played our Statis-Pro wild card game 2s.

After being stunned by the White Sox 8-5 in Game 1, the Yankees erupt for an 11-2 win in game 2 to force a Game 3 in hope of advancing ot play Cleveland.

The ChiSox got to two PB 2-9 pitchers (Cole and Holmes) in the opener, but the new PB2-9 Nestor Cortez allowed no earned runs. The only runs allowed were due to terrible fielding by the weak fielding short stop Gleyber Torres (E5, CD1 is the worst of 5 fielding factors). Torres made 2 errors.in the 6th inning to load the bases, the on a CD (clutch defense) allow the ball to get past him for a 2-run single.

However Judge had 2 doubles and a single to follow up on his 2 homer 1st game. Perhaps more.important was the No. 9 hitting centerfielder acquire from st. Louis, who had a triple for the 2nd straight game, but more.important is a perfect E1, CD5, T5 took the Yankees from the worst to the best fielding in cf. Aaron Hicks is a great hitter but a e4, CD1, T2.

The deciding game 3 will put the White Sox Michael Kopech (third best of seven PB 2-7 and very low hits allowed at 11-17 on card) against the Yankees Frankie Montas (PB 2-8 and very few walks at 52-55). 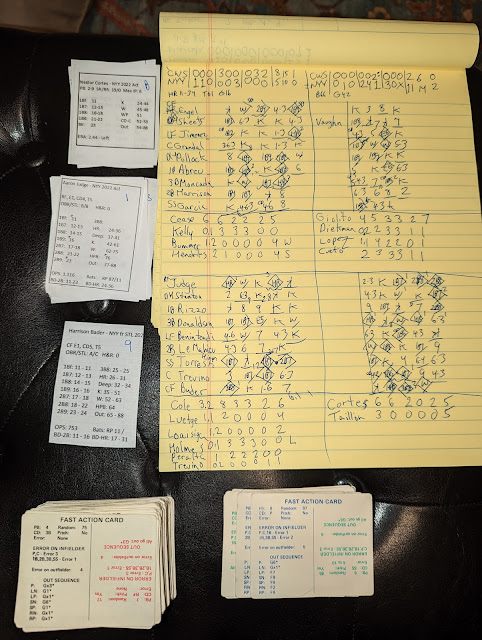 Posted by JohnPudner at 6:50 PM