Like the first game, it ended with Chapman striking out all three that he faced in the bottom of the ninth.

The NL utilized their speed on the bases to execute the hit and run to perfection - going 2 of 4 and advancing runners the other two times including Posey's RBI single in the third and RBI groundout in the 5th. Betts drove in the third and final NL run with his second double and third hit of the game.

Overall there were more than twice as many hits as in the AL 1-0 win in game 1. In that game both teams had just five hits, but the AL outhit the NL 13-8 in the second game to sweep.

We joke about the "statis-pro gods" making things happen sometimes, and we had one if those funny moments. The AL Commissioner put Rays close Nick Anderson on his AL roster, even though I had left him out of my interleague play because he tore something in his elbow early in the season and has been out for months. I left him in the pen for the 1st all-star game, but in the second game brought him in after Ohtani's 5 innings. The very first card was a Z-play, and the result was Anderson had to leave the game before facing one batter. The official z-play was an ejection for arguing balls and strikes, but im considering it an injury. The AL's four relievers who stepped in went four scoreless innings, and in real baseball Anderson is throwing off a minor league mound for the first time in months, so hopefully he returns.

The AL does not have as long a winning streak in Statis-pro as in real baseball. The NL did win 1-0 last year, when we used the pb 2-9 cards that were too strong mathmatically. However, the AL did dominate our 2019 game 5-1 and won on back-to-back Astros homers in my first year back in 2018, making the AL 4-1 since i resumed playing. 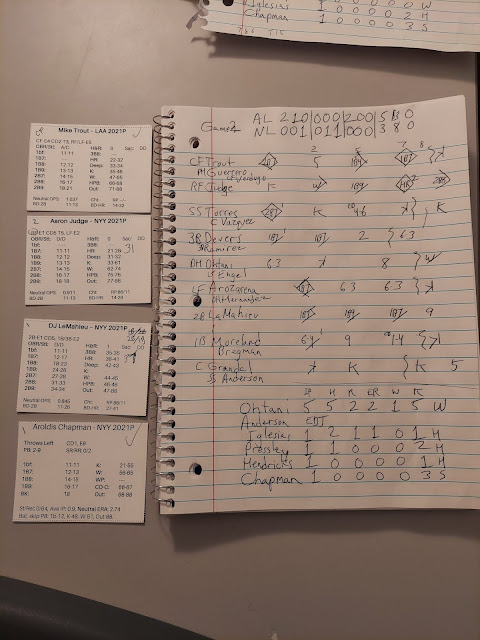 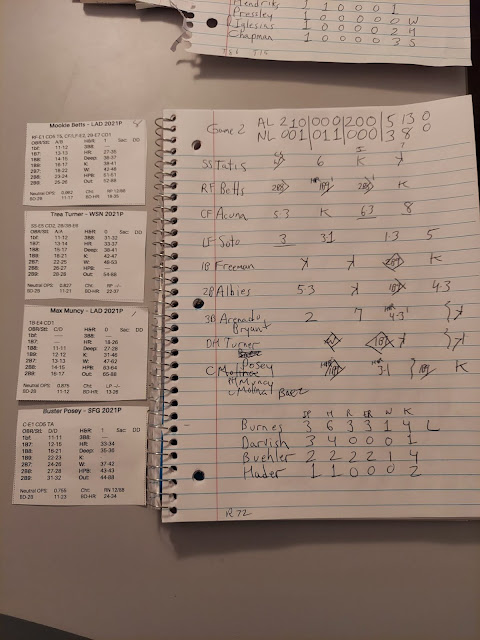 Posted by JohnPudner at 9:35 PM