Great NBA players did not always have great college careers. Among the players suited up for the NBA Finals, 2-time Bucks MVP Giannis Anteokounmpo, as well as a couple of guys on the bench – his big brother Thanasis Anteokounmpo and the Suns Dario Saric – did not play college.

However, this year's NBA Finals includes some of the highest rated college players in the history of the Value Add Basketball ratings, as well as eight players who also played on one of the all-time great basketball teams included in the popular Value Add Basketball Game. (50,800 visitors have now pulled up the game, which includes these free player cards.)

I happened to just return from Wyoming, whose 1943 team is the earliest in the game due to Kenny Sailor leading the Cowboys to the National Title after inventing the jump shot.

At the bottom of this blog we show the college rating of each NBA Finals player, including five players who ranked as one of the top three players in all of college basketball when they played.

Two of those elite Value Add Basketball 1st Team All-Americans do not have cards in the game:

The Suns' reserve Jevon Carter was the top ranked player in the 2012 season with West Virginia, which is represented in the game by Jerry West's 1959 team and Kevin Jones' 2010 team.

The Suns' Jae Crowder was ranked as the second best player in the country behind Anthony Davis in 2012 when he beat out Jones as Big East Player of the Year while playing for Marquette, across the street from the Buck's home court where he drilled 6 of 7 three-pointers Sunday night for the visitors. Marquette is represented in the game by Al McGuire's National Championship team of 1977, and Dwyane Wade's 2003 Final Four team.


Mamadi Diakite's was rated higher in the 2020 season, but we show his 2019 card below when he was part of the national championship team at the University of Virginia.
(Note: thanks to this great blog for showing how to insert these photos side-by-side in blogger)
<br>
<table><tbody>
<tr><td>photoa
</td><td>photo b
</td></tr></tbody></table>
<br>
If we seeded the eight teams of these NBA Finals Players based on the ratings at www.kenpom.com, we would end up with this tournament bracket: 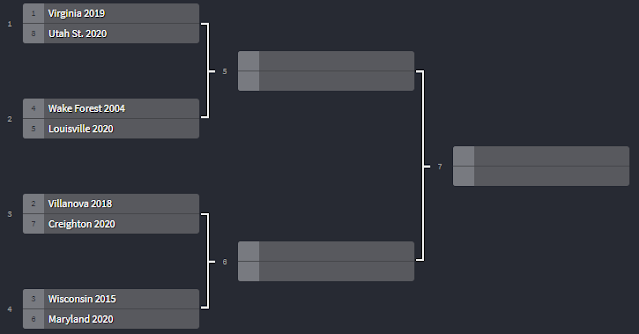