The Braves pen blew two chances to move into a playoff spot in their series against Colorado, where the all-star game was moved.

In their first Statis-pro series after Acuna's season ending injury (we leave players on 10-day DL in game but not if they hit 60-day DL or will miss the season), and the first game since they acquired Pederson of the Cubs.

Albies hit 2 homers and more shockingly Jackson hit 2 triples, and the Braves led 9-3 after 7 innings, needing only a scoreless inning or to hold the Rockies to 1 run, but Minter failed to wrap it up for the 5-run sweep credit, so they just received credit for a 2 games to 1 win.

The second game they wasted 7 scoreless innings from Ian Anderson in a 2-1 10 inning loss. The Rockie likely heading somewhere else in a trade in the week ahead, Trevor Story, homered int he first game ti start the rally of Minter then went 4 of 5 woth a double, and drove in the winning run in the 10th.

Marquez not only went 8 innings allowing only one run, but also doubled at the plate.

Wild card if today: StL at ChC and Cin at LAD 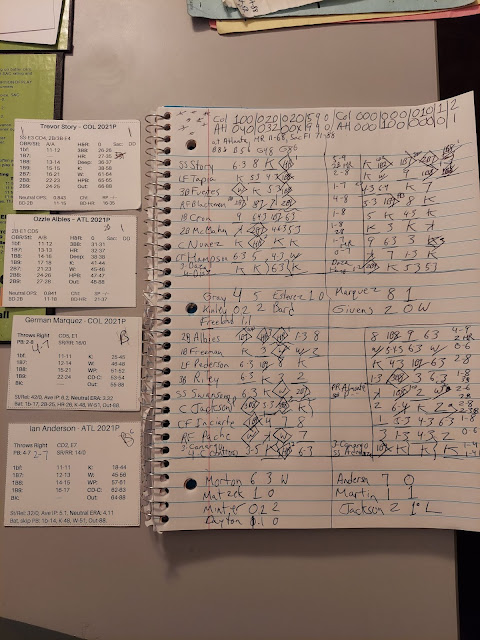