Future defensive player of the year Neemias Queta's 11 points, 10 rebounds and three blocked shots helped 8-seed Utah State dominate #1 seed 40-30 on the boards. Utah State made the "NBA Finals Alumni Tournament due to Sam Merrill being in the finals. Queta's player card appears by the UVa starting line-up further down, and the following is from the Utah State AD page - showing his 2-handed block. 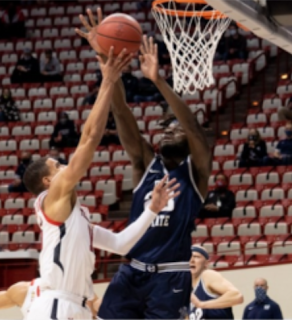 The fun battle at center featured Queta against the NBA Finals player from UVa's 2019 team, Mamadi Diakite, who blocked 5 shots as part of a suffocating defense that led UVa 60-45 win. The Cavs will face the 5-seed Louisville 2020 team thwt snuck out a much higher scoring game in an 80-79 thriller over Chris Paul's 2005 Wake Forest team. 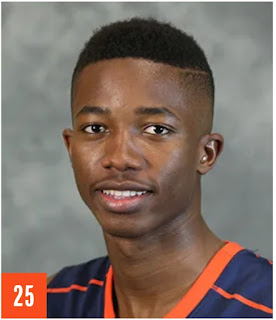 While UVa's weakness is rebounding, they are extremely tough to beat for a couple if reasons. In addition to Diakite's huge 21-29 blocked shot range, all the starters have strong steal ranges (11-14 to 11-17) and Jerome, Hunter and Guy have great endurance, all playing all 44 possessions (44-1) in the game.

Most important however is the team defense of -9. The Utah State dunk range is 51-54, but the first -4 takes awayball the dunk numbers and extra -5 of the -9 reverses the range to make it a 51-55 Stop range - meaning an automatic turnover on those numbers.

Overall the Cavs forced 21 turnovers to knly 11 for Utah State as part of the suffocating defense.

We also tried a video to show how we shuffle the three fast action cards we used for this game ra5her than the dice.

Posted by JohnPudner at 7:41 PM