There is a link between the championship celebrated by my UVa friends in my native Virginia, and the championship team being celebrated in my beloved college town of Milwaukee - and he has orange hair for easy identification, and had one of the greatest 6 seconds in March Madness history.

During breaks of the Milwaukee Bucks' Game 6 triumph and first NBA title in 50 years, we pitted two of their players in our Value Add Basketball Game. In real life the two Bucks' in our VABG game watched from the bench as their teammate Giannis Antetokounmpo ("the Greek Freak") delivered Milwaukee's first NBA title in 50 years with one of the greatest NBA Finals performances in history.

Mamadi Diakite did get in the TV screen coming off the bench with his orange hair as several Bucks' playfully tried to keep Chris Paul from getting to the ref to argue an out-of-bounds ball. In the Value Add Basketball Game he had 5 blocked shots, a steal and 7 rebounds to lead a 1-seed UVa defense that simply shuts everyone down, winning 71-58.

Jordan Nwora already led his 5-seed Louisville 2020 team to a 1-point upset of the 4-seed Wake Forest 2005 with Chris Paul. In the VABG he had a team-high 15 points, the only Louisville 2020 player in double digits as UVa forced 17 turnovers while only giving it up 8 times.

UVa's unmovable defense will either get the Villanova 2018 unstoppable offense, or the 2015 Wisconsin team that shocked the Kentucky team that was being called the best of all time. The 8 teams in our tournament are the only 8 in our game with a player in the NBA Finals. Villanova is in due to the Suns' Mikal Bridges, and Wisconsin due to Frank Kaminsky. 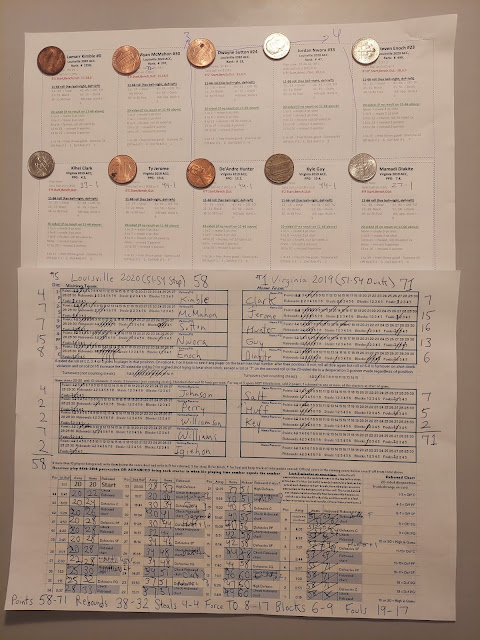 Posted by JohnPudner at 9:03 PM