Sometimes something funny happens in a board game that would make sense if these were real players and not cards on a Board. After the Nats took a 10-0 lead on the Nats and Quijada was left in the game to save the rest of the staff for the next game - and Quijada then hit two batters with pitchers (understable if a real game). That loaded the bases, and retaliation Soto blasted a grand slam homer to make the final 14-0 (we would expect no less of Soto after two teammates were hit!)

The Nats 4-1 win in the second game gave them credit for a 5 games to 1 edge, which made them one one of three teams just one game out of a playoff spot after we had given them up for dead. They play at Yankee Stadium next - a tough line-up to face but with Scherzer and Strasburg on the mound for those two games, they have a shot to catch the Reds for the last playoff spot. Here is how the Statis-Pro line-ups would line-up today with our 6-team format.

Reds at Cardinals, winner would get Brewers

Dodgers at Cubs, winner would get Mets

The series also meant that for the first time the NL leads the overall interleague play with the AL, 55 games to 53 games. 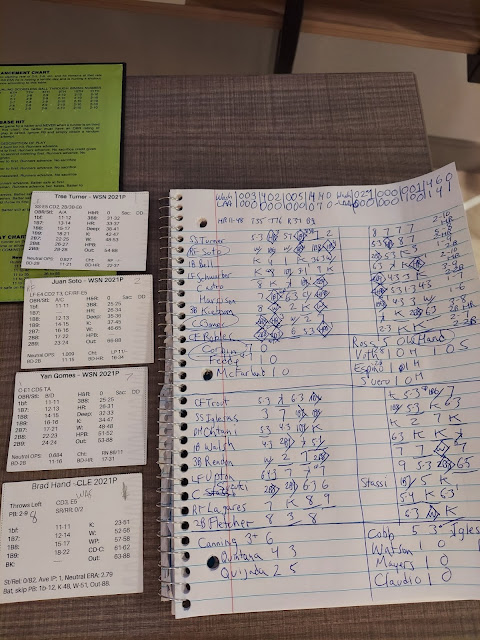