Since we invented the Value Add Basketball Game in February 2019, we have played a couple of hundred games, and had never had a team score 100 points in regulation until today. The game took 44 minutes to play - with the first card flipped at 1 p.m. and final card at 1:44 p.m.

The team that accomplished it was the only team with two players in the NBA Finals, Phoenix Suns' starter Mikal Bridges and injured Milwaukee Buck Donte DiVincenzo, from our 2-seed and the National Champion 2018 Villanova team.

The victim was the 2020 Creighton team, which does have a very poor defense (Adj. Def 0, worse than the average team's -3) but is happy to simply outscore opponents. The Blue Jays team in the game today actually won our 68-team Value Add Basketball Game championship after Covid cancelled their real Big East tournament game at halftime and March Madness. Ironically, that week I had breakfast with their point guard Marcus Zagarowski's parents as few blocks from Madison Square Gardne in disbelief that the hottest team in basketball (they had improved from 23rd to 7th in one month in the AP poll) would not have a chance at a real run as Covid collapses the world around us.

While one group of former Creighton players participated in The Basketball Tournament (TBT) airing on ESPN, as the Omaha Blue Crew, the VABG Creighton 2020 player cards were in our 8-team NBA Finals college alumni tournament due to Phoenix Sun Ty-shon Alexander, one if the trio of great 3-point shooting guards along with Zegarowski and Mitch Ballock. Those three all have the highest possible endurance of 44, meaning they play all 44 possessions of a VABG game.

Zegarowski and Alexander combined for 4 first half 3-pointers and then Alexander hit another one to open the second half to give the Blue Jays a 39-34 lead in the upset big against the 2-seed Nova.

And then Villanova started to look like the team that blitzed Michigan in the 2018 National Title game with a 44-17 first half before cruising to victory. DiVincenzo hit a 3-pointer, then immediately stole the ball and fed it to center Spellman on a dunk plus foul to give Villanova their first lead of the game 41-39 with 18:30 to play. At the 8:17 mark Bridges had a steal, and was fouled on a dunk, hitting the free throw to make it 74-51 Nova less than 12 minutes after they trailed.

As usual., Nova won the turnover battle big 17-7, and doubled Creighton in the second half 72-36 for the most scoring in a half ever in a VABG game for an offensive efficiency of 1.95 points per trip (33 possessions in the second half, and there were a total of four extra in this game for fouls and steal/fast breaks in the final 9 possessions.

It was the first time a team every scored 100 points in regulation in a VABG game, with the final score of 106-72.

Villanova 2018 represents the Big East in our semifinal against another Big Ten foe, the 2015 Wisconsin team of Frank Kaminsky that stunned the Kentucky team that many considered the greatest team in history in the Final Four that year.

The other semifinal is an all-ACC game, with the 2019 champion Virginia Cavaliers facing the only upset winner of our opening rounds and only 2020 team, the 5-seed Louisville 2020 team upset Chris Paul's 4-seed Wake Forest 2005 team 80-79. 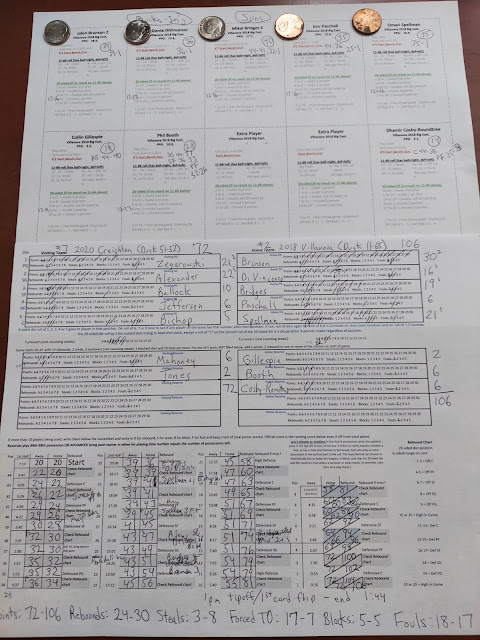 Posted by JohnPudner at 1:36 PM