The following are the Statis-Pro batting cards for every AL player who finished in the top three in All-Star voting at their position.

While we are playing out the NL season (grid of all games here), we caught up with all the AL cards while giving each of our NL teams two series against an AL team. The NL leads our interleague games 58-56, but the three AL teams that still have 6-game series to play are strong - the White Sox, Astros and Yankees. However, the Astros and Yankees will be throwing their 3rd and 4th best starters while the other four teams will be starting their top two starters in these series.

The first set of cards including perhaps the two best players in the game - Angels Ohtani and Trout - and the seven Astros who finished in the top three at their position.

Ohtani added one home run number to be even stronger with homers on 24-32, while Gurriel is an even bigger home run improvement of three numbers, to 31-36 with an incredible ZERO home run numbers which also gives him the option of a Hit & Run 2 when someone is on first base. 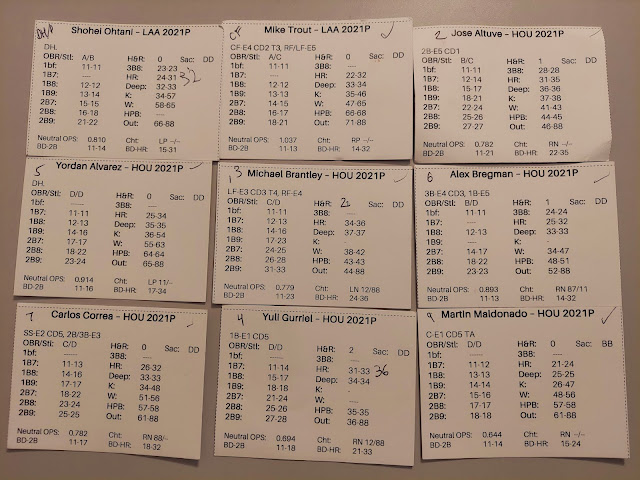 The next set of cards includes the five Blue Jays All-Stars, the Oriole, Ranger and the first two Red Sox.
You can note Adolis Garcia's card is a "fringe" card. This blog shows a basic card you can use for any new pitcher or batter based on their ERA or OPS. Garcia's excellent OPS of .850 yielded the card below, and being on pace to get to 20 stolen bases resulted in an OBR/SP: A/B. As you can see, four of the other eight players had home runs added based on hot starts in April and May. 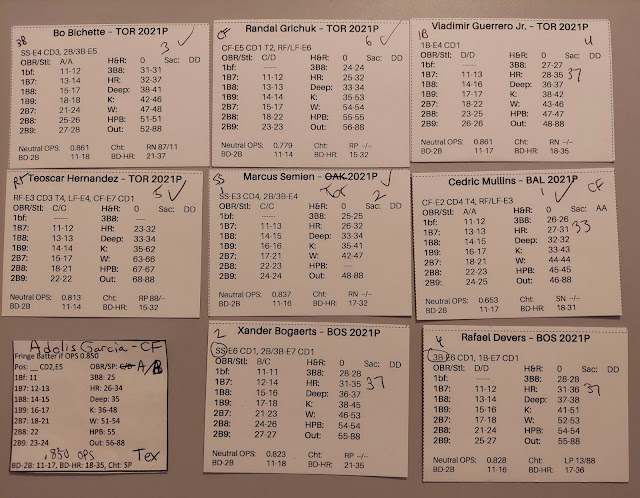 The final screen shot shows the rest of the Red Sox, as well as a Royal and Twin, as well as three White Sox and two Yankees. The biggest improvement of all batters in the game was from the Twins' Byron Buxton, who added four home run numbers to an incredible 24-36 home run range, though that range is higher because he never walks. JD Martinez improved by two homers to 26-34. On the Yankees, Judge is even better than his projected card, adding a homer to now homer on 21 to 31, while his teammate DJ LeMahieu is so good he is an all-star even though his card actually is worse than projects - dropping two numbers to 36-37. 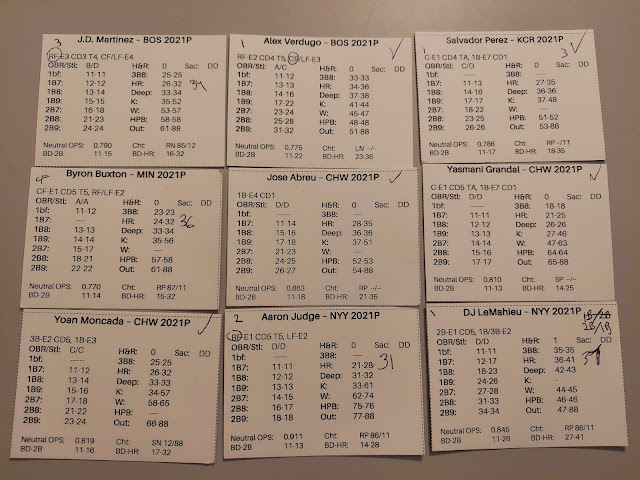