New Blue Jays Dominate, but All-Stars Do Not in Split with Cards

The forst two Blue Jays in the line-up slugged away, but it was only enough for a split in Sahlen Field in Buffalo.

Former Astro George Springer went 3 of 5 with a homer and 4 walks, and former A's shortstop went 4 of 9 with a double and homer  and was robbed of a 5th hit when the Cardinals Goldschmidt grabbed a line drive and doubled Springer off 1st base.

The all-stars hitting in the 3rd and 4th spot - Bichette and Guerrero - went only 3 of 17 with one homer.

Ryu went 7 scoreless innings for a win, but Bichett's error at third base with men on the corner on a double play grounder spoiled a 5-0 lead that would have given the Jays credit for a 3-game sweep (ahead at least 5 rund at the end of the 8th). However, Nogowiski, playing because of the DHs hitting in the AL park, scored on the error to make it 5-1.

The Cards 8-1 win in the 2nd game was also not enough for sweep credit because the Cards led.only 3-1 at the end of the 8th. Molina's 3-run homer in the 9th capped a rally to make the fimql 8-1. 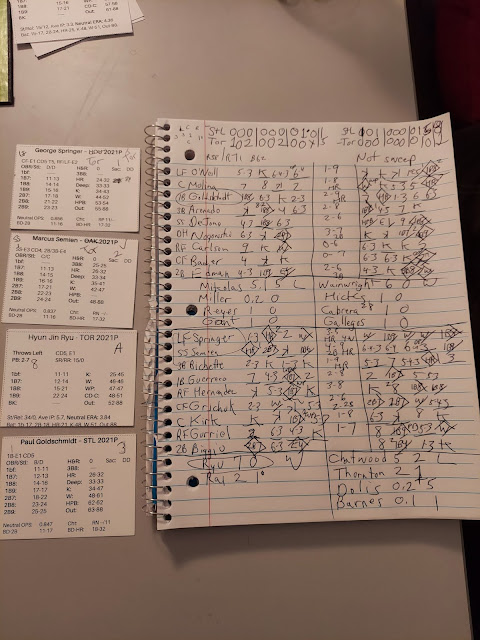 Posted by JohnPudner at 8:20 PM