Click here for Fast Action Cards in dropbox for the sharpest images to print them front-and-back (15 sheets of paper) to use them rather than dice to play the Value Add Basketball Game.

If you cannot access drop box for any reason, you can also click on them in this google file version or you can print this (print at about 175%, front and back) to print one front-and-back page of these instructions, and then another 15 pages front and back (30 pages total). However, the print quality is not nearly as good as the drop box version in the top paragraph.
Click here for full instructions for the game, however this blog gives basic instructions for printing these cards and using them to replace rolling dice.

Now you are ready to use these cards instead of dice in the game.

If you print on normal thin paper, the cards may be hard to shuffle like a deck of cards. We suggest you either flip cards one at a time on a bed or floor, or throw them into a salad bowl and flip them around.

To start the game you can either stack the cards or simply leave them scattered in a salad bowl.

Use BLACK, then BLUE then GREEN then RED sections of 144 FAST ACTION CARDS for results. However you initially set up the stack of cards, start the game by pulling out the first card and putting it down like the cards are pictured below. On the first time through the deck, always use the BLACK font type for the results. By the time you get through the deck the first time, all 144 cards will all be lined up with the section with the black font type in the top left. Simply slide the cards to the left and start to flip the cards over and now the side with the blue font will show up every time. Once you get through the deck again you can slide the deck to the left again, and flip it over this time, and start to flip again, and now the side with the green font will show up each time. Once through this deck the final time, simply slide the deck to the left one more time, and as you start to flip the side with the red font will show up every time. Normally the game will end with plenty of red section results yet to be flipped over, however if a game with extra overtimes or many offensive rebounds leads to you going through the deck four times you can either reshuffle or begin to randomly pull cards out of the middle of the deck to finish the game.

If the sections with black font below appeared in order in a game, the game would start like this; 1) On the first Fast Action Card played refer only to the top two lines of the section with black font. On the first card pictured below, the top line indicates a blocked shot IF any defender has an (all) in the block section of his card, which on different sets of cards could be a block range that reads "21-26 (32)" or "21-26 (all)" or "21-30."

Most teams will not have a shot blocker this good, and the second line on the same card tells us who on the offense has the ball and can shoot if nothing happens on the top line. On the first card below, the ball goes to the "8" player (as indicated in the VABG Rules, while you should place a coin on each of the five players in the game at any point, the three players with a dime on their card get the ball in order as the "6," "7" or "8" number on the 8-sided die or on these cards, so the third player with a dime on his card would get the ball in this case if the shot was not blocked.

BOTTOM LINE OF CARD. The bottom line of the card is only used if a shot or foul shot is missed and you need to determine which player got the rebound. Assuming a shot was missed on the 15 on the 2nd card below, the bottom line on the third card indicates that the defensive SF (small forward, third player from left to right in the game" gets the rebound IF a "5" is in his range of 1-6. If the Offensive SF has a lower range - e.g. Defensive Rebound 1-4 - the the opposing Offensive SF gets the rebound instead. Not that on the scoresheet provided in the VABG game, the bottom line is only used on the possessions that are shaded.  On the other possessions that are not shaded, the defense always gets the rebound and the scoresheet indicates which defender grabbed the rebound.

Once the possession ends for the team with the ball (made basket or free throw, turnover or defensive rebound), write down the updated score for that team at the end of that possession, and start the process over at the top of the next card to start the possession for the other team. 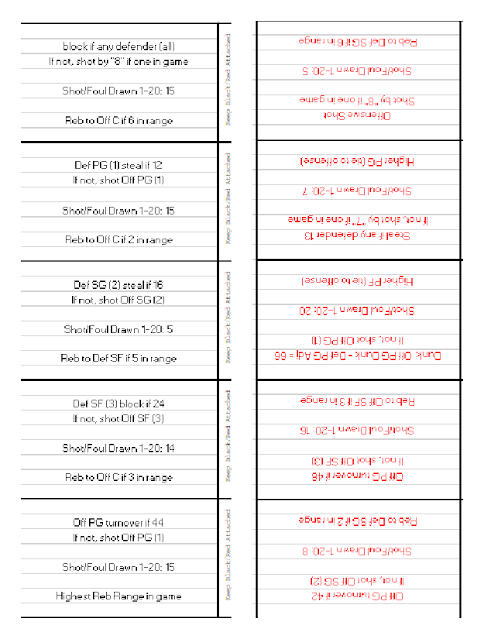 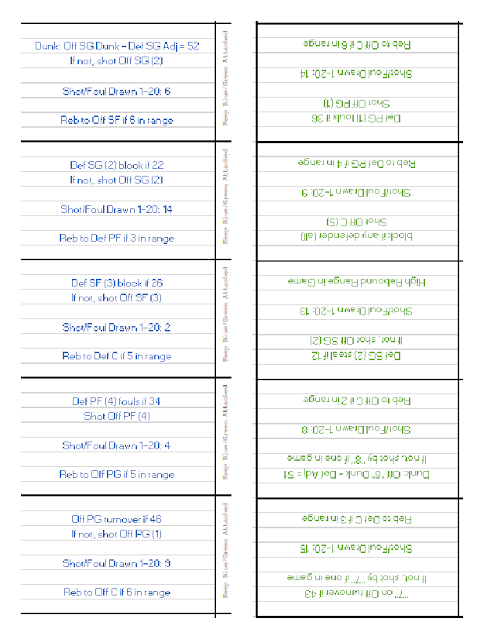 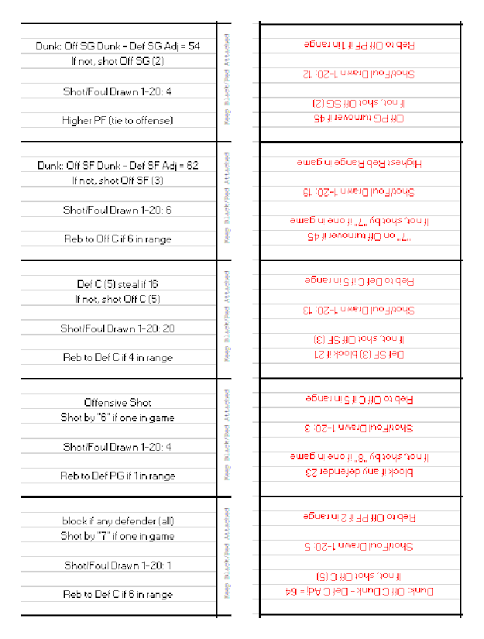 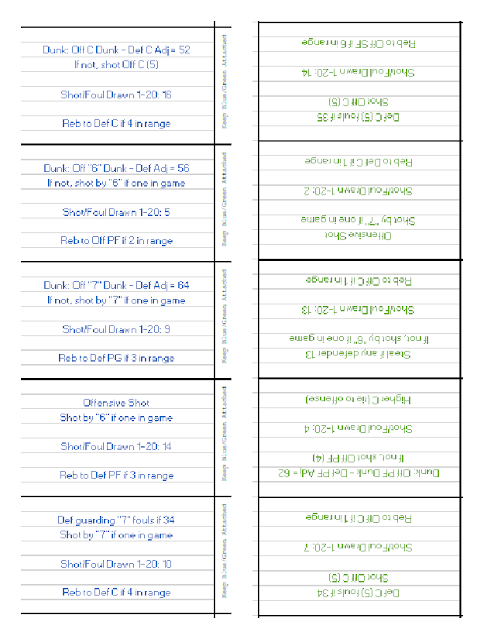 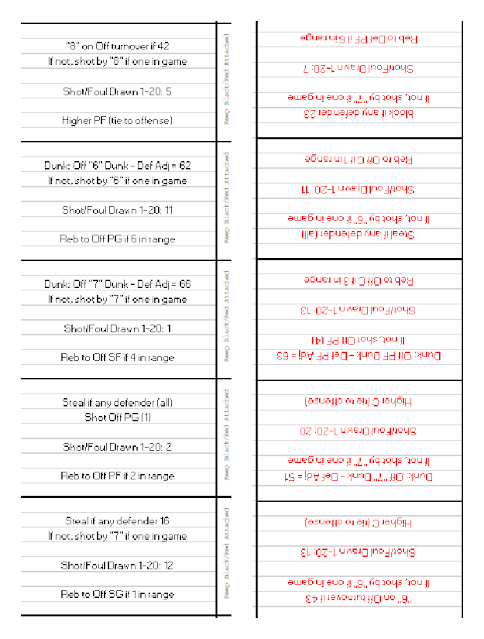 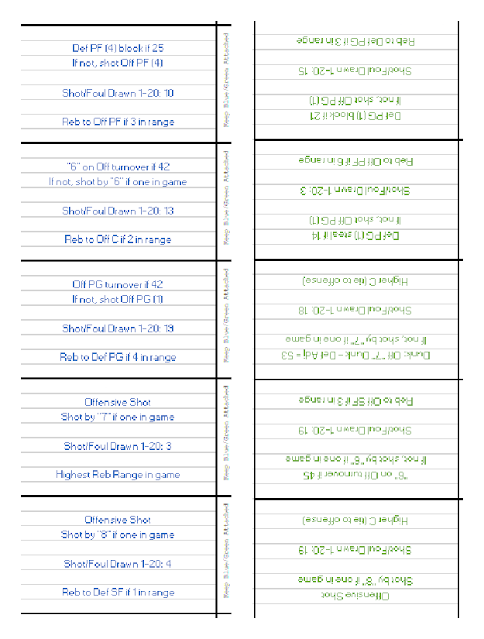 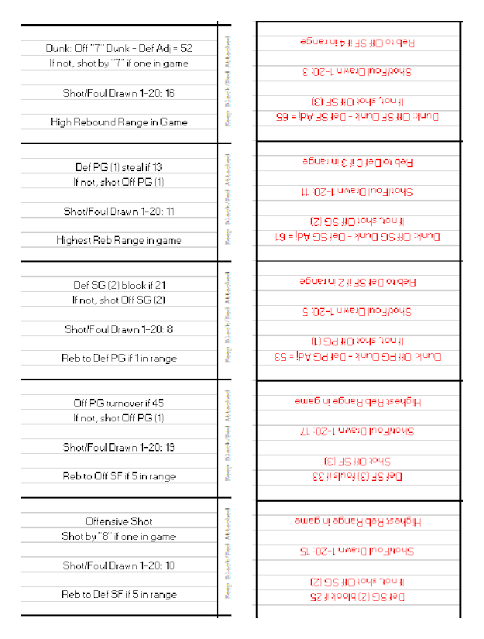 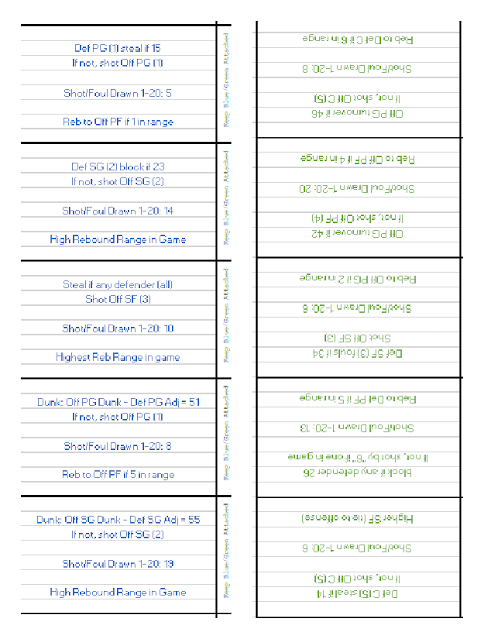 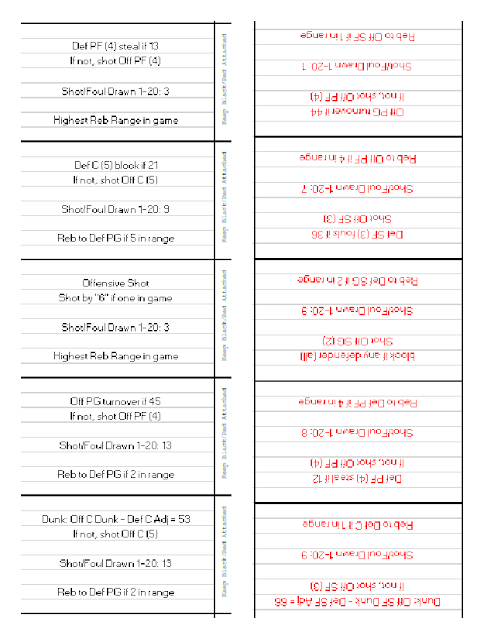 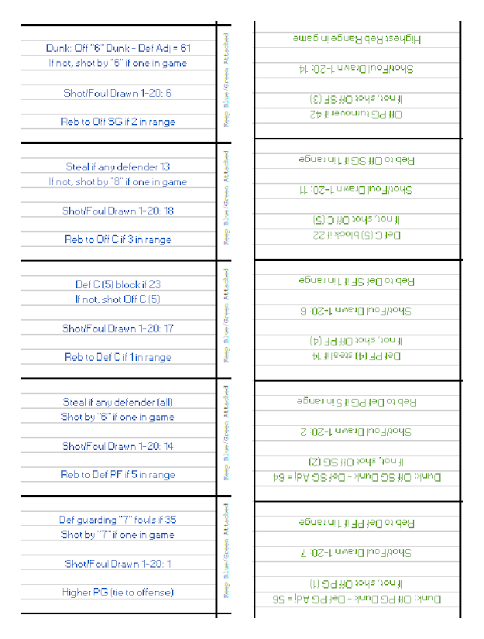 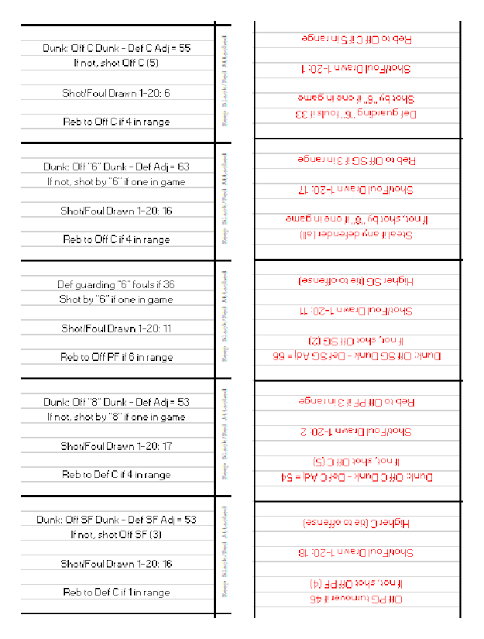 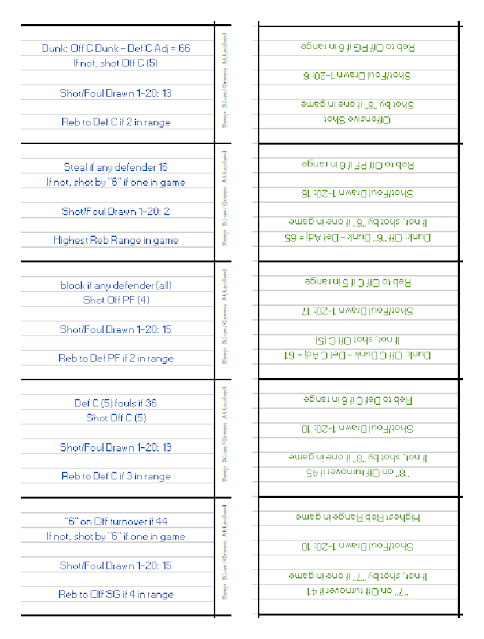 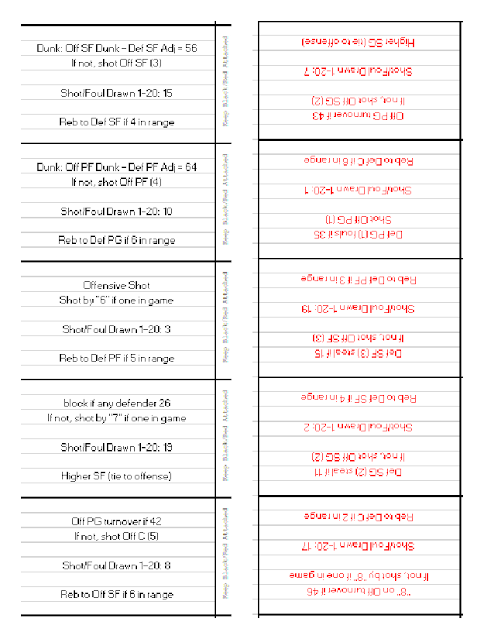 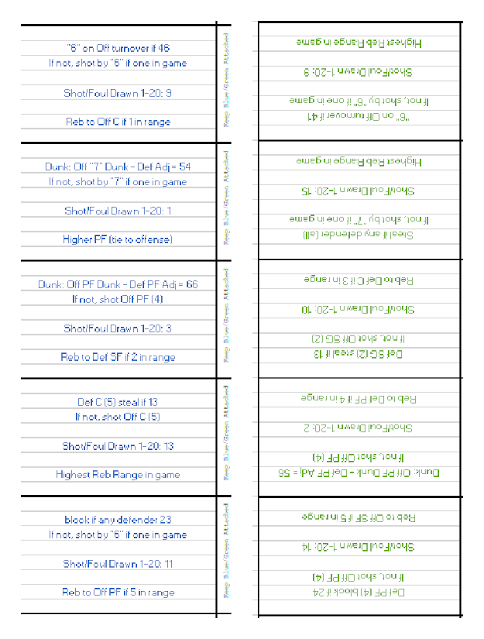 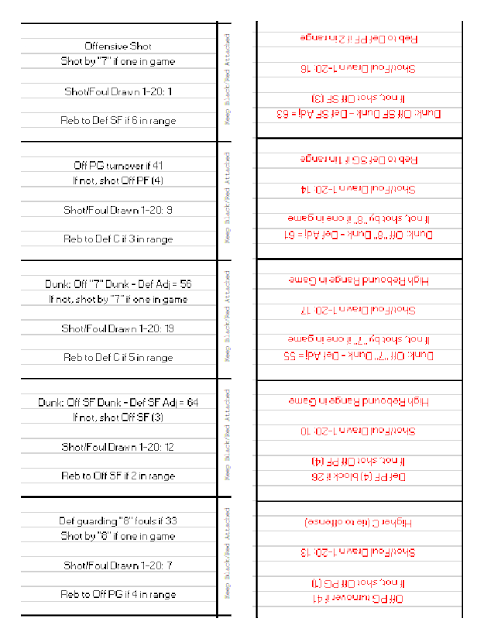 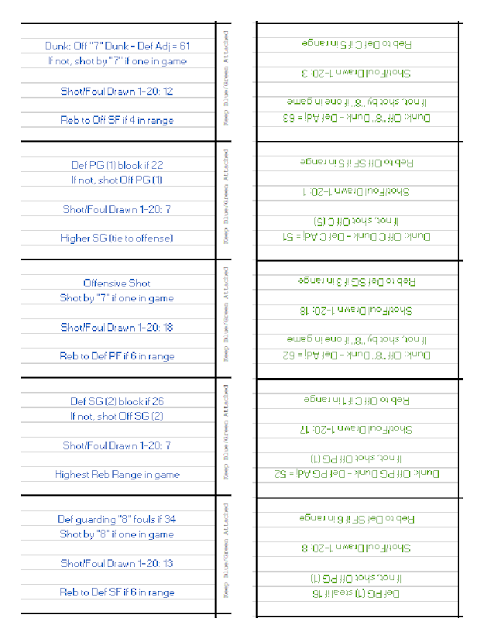 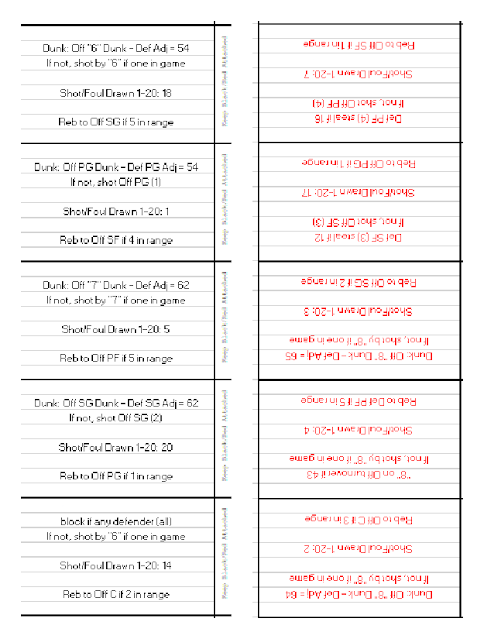 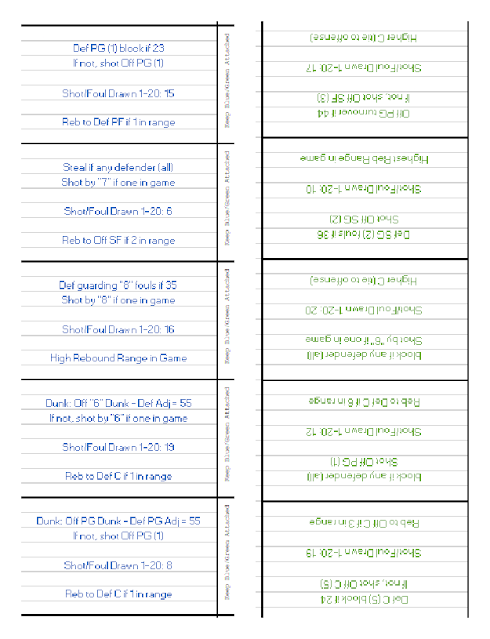 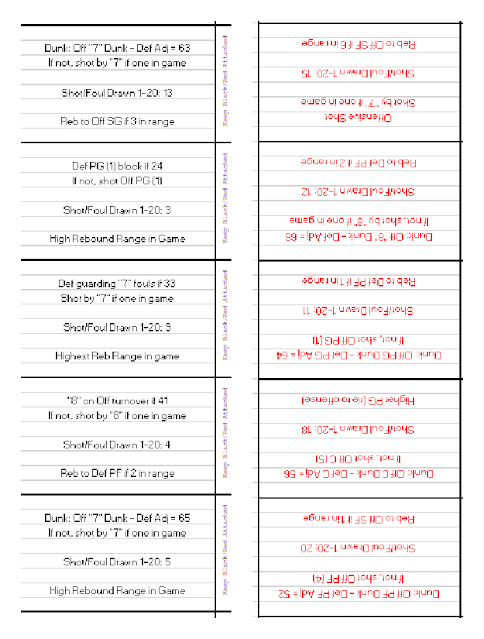 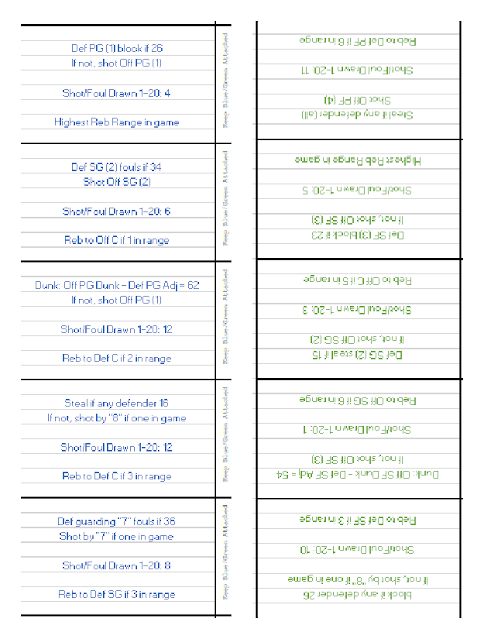 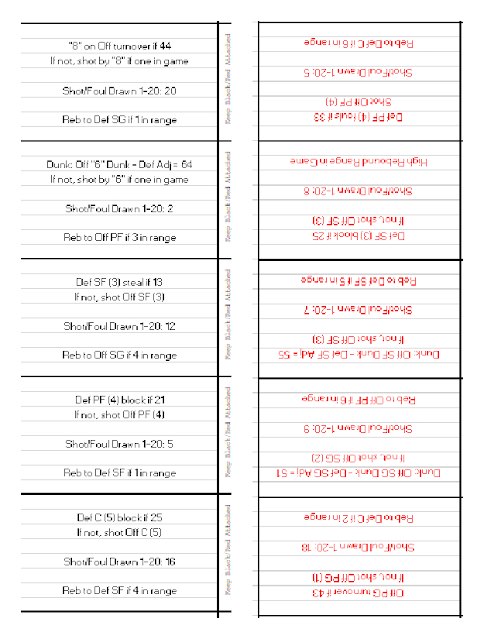 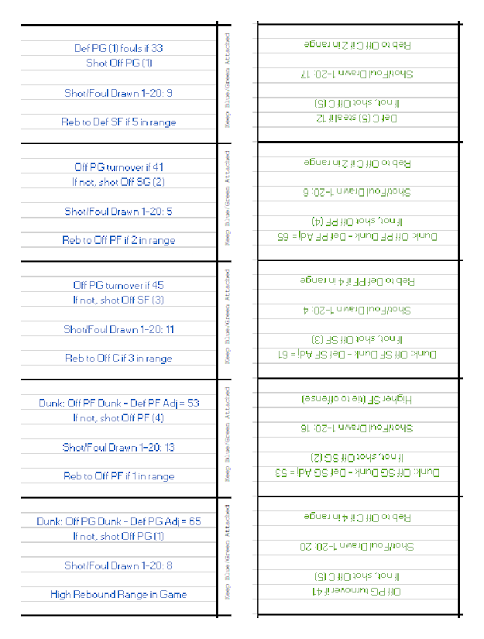 Sheet 12 front and back 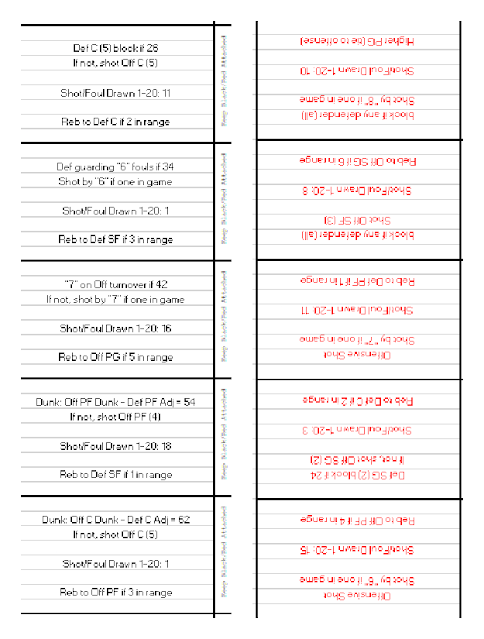 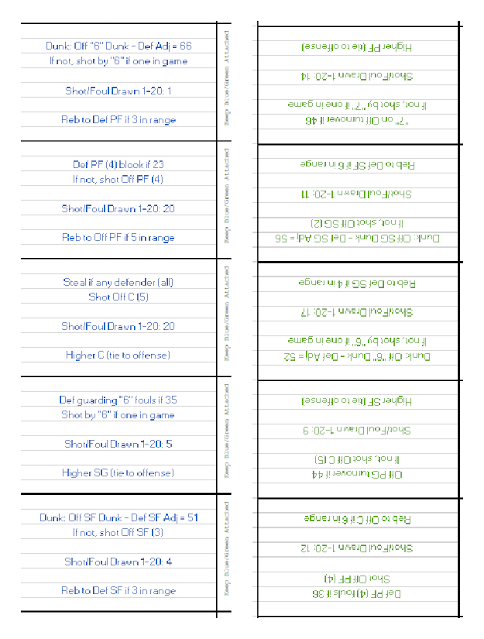 Sheet 13 front and back 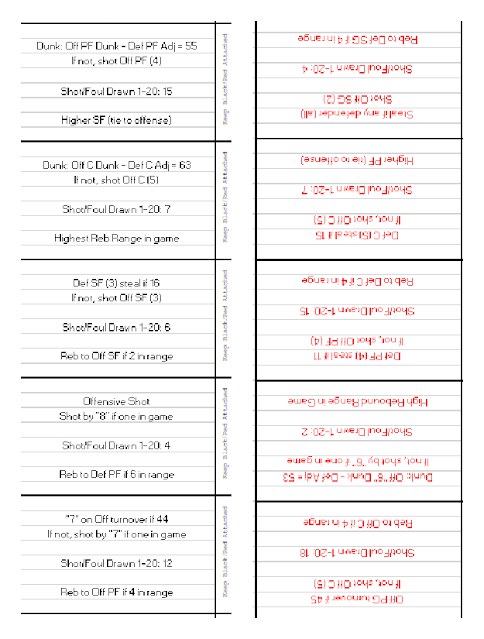 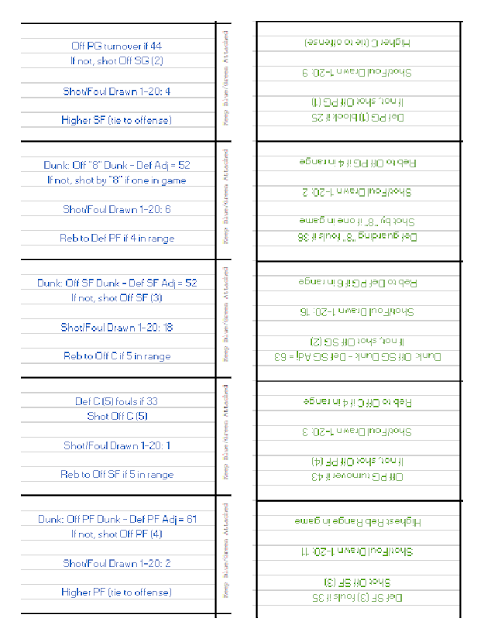 Sheet 14 front and back 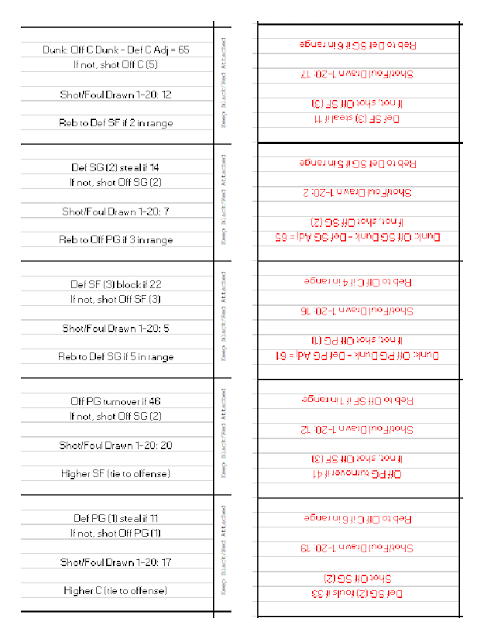 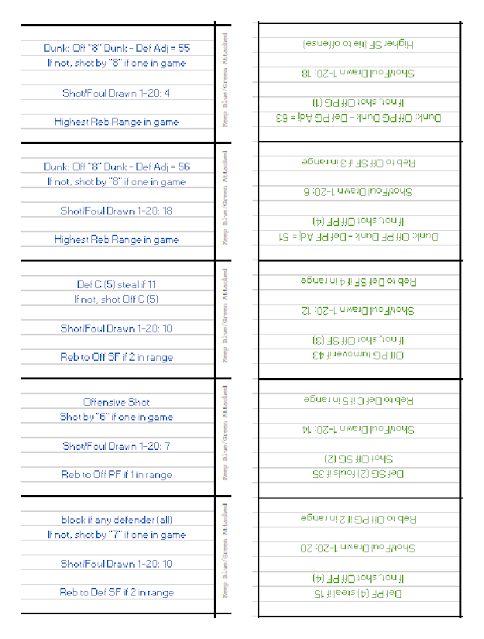 Sheet 15, front and back 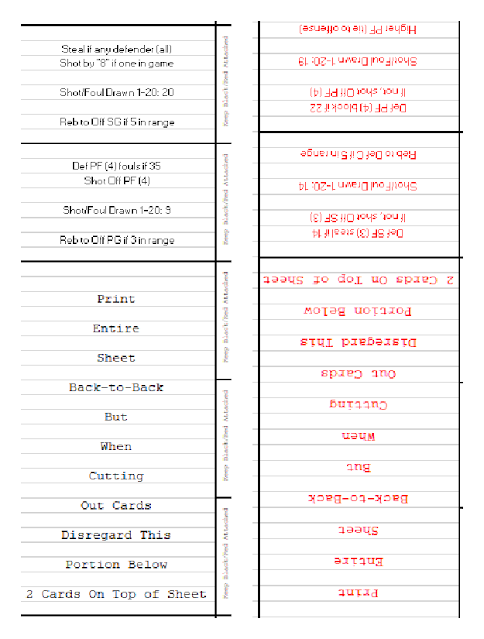 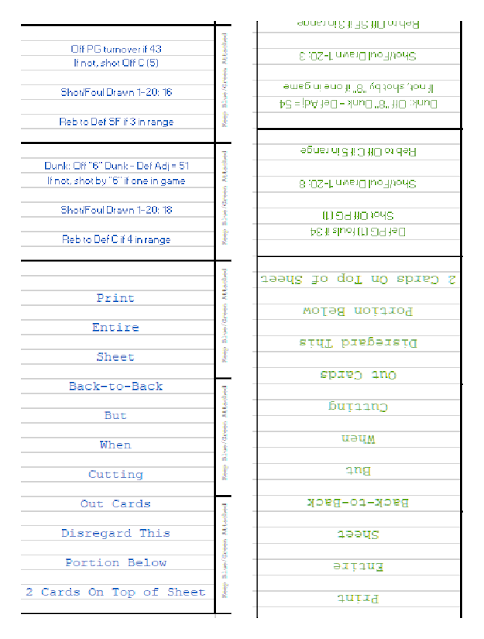