After posting the Statis-pro player cards for both the NL and AL, we continue our Interleague theme. The NL led the AL 58 games to 56 games with only the following three 6-game series left.

Yankees even IL play with wins vs. Scherzer-Strasburg

The two leagues have now split our first 120 interleague games 60-60.

Domingo German did not have a projected cards, but has earned a solid PB2-7 fringe card (see photo, above average) and was saved by his defense to edge Scherzer 2-1. German gave up a run and loaded the bases in the top of the 4th, but an apparent big rally ended when Gomes line drive up the midde - which would have scored 2 runs against most second baseman, was instead grabbed by LeMahieu and turned into an inning ending double play. Andujar then hit a clutch 2-run homer of Scherzer in the 5th for the 2-1 win.

The Yankees then scored 4 runs on Strasburg for the 4-2 win. Apparently Nats catcher Yan Gomes thought the Yankees had some home cooking, as he was ejected for arguing balls and strikes. 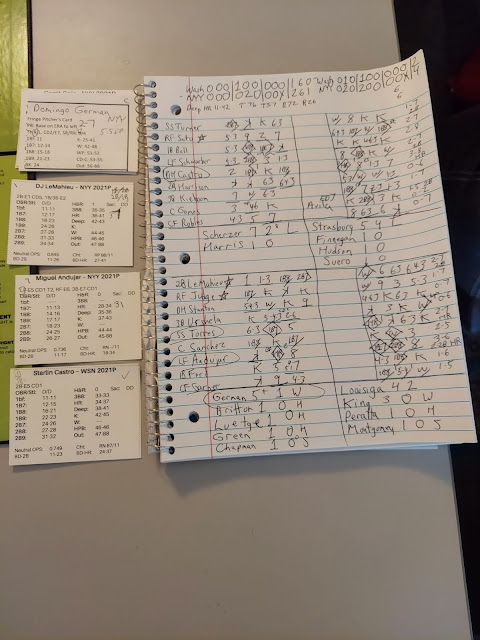 The Cubs and Astros split their series to leave our interleague series tied 63-63 with only the Braves at White Sox series remaining.
Gurriel's hit and run rbi grounder rallied the Astros to tie the game 3-3, the Alvarez singled in the game-winner for a 4-3 victory. The two combined to go 5 of 14 with two walks,.two doubles and a homer.
The Cubs won the second game 6-4 behind Baez 2-run homer, rbi walk, and double. 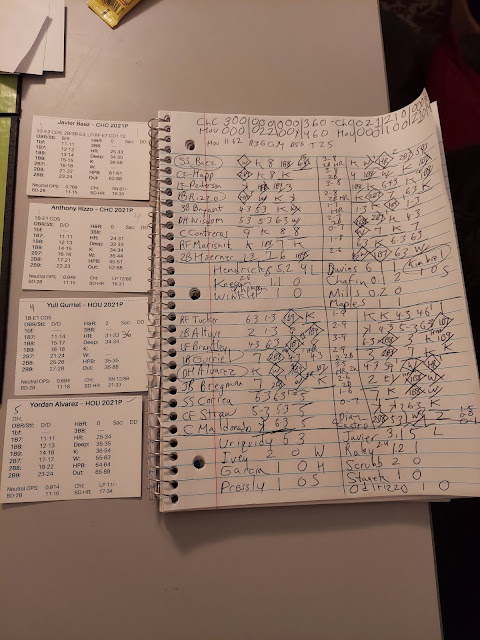 Here is the grid of games and remaining schedule.

Posted by JohnPudner at 2:07 PM