Rookie big man Jalen Smith brought his 2020 Maryland team with the best inside-outside duo with his point guard Anthony Cowan against teammate big man Frank Kaminisky and his 2015 Wisconsin team that won a stunner in the 2015 Final 4 against a Kentucky team many considered the greatest team in history.

We start this blog by setting up the teams. Here is who we put in the game at the beginning (44th possession) and leaving Smith on the bench for the first three possessions so that he could then play the final 41 possessions of the game. Here is the line-up. 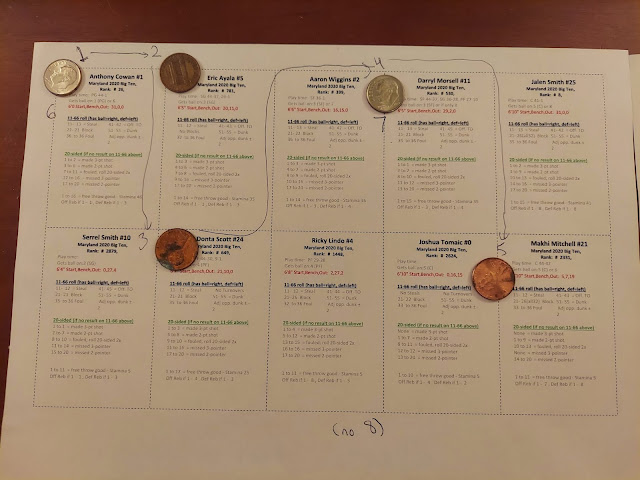 The coins are the five players in the game, and we drew in the order the get the ball on the 8-sided die or top reading on the fast action card, with a roll of 1 to Cowan, 2 to Ayala, 3 to Scott, 4 to 2021 Big Ten defensive player and now Marquette player Morsell and 5 to Mitchell.

The dimes only go to players with a 2nd number on the "gets ball on" reading on the player card, so a 6 alos goes to Cowan, a 7 to Morsell and 8 to Mitchell.

We then put coins on the players who will start on the court for Wisconsin, and we chose: 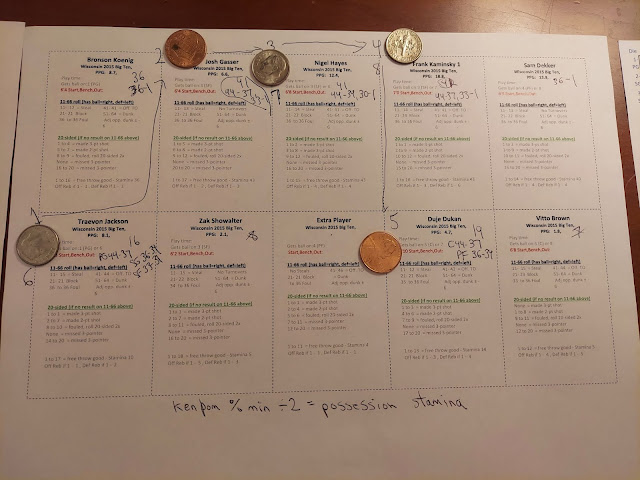 You may notice the "play time" space was accidentally left blank, which leaves two options. The simple option in any game is to play the bottom row from possession 44 to 38, and then the top row from 37 to 1, the final possession.

However we took the other option of adding the stamina for each player by going to www.kenpom.com and then taking half the % minutes number (Kaminski's 82% min means he can play 41 of the 44 possessions without getting tired.

By the time we made it to the 26th possession to go, wisconsin led 48-40 all all the starters were in the game with enough duration to play the last 26 possessions without getting tired. 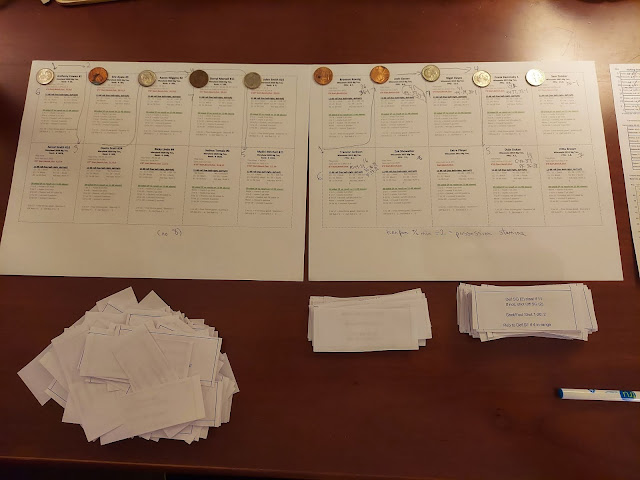 However we did have one unplanned substitution with 10 possessions left. Cowan drew a 5th foul on WI PG Koenig.

Surprisingly Zak would end up sealing the game with a 4-point play with 2 minutes to play to give the Badgers a 77-65 lead.

Cowan (26 points) and Smith (25 points, 11 rebounds, 5 blocked shots) were an unbelievable inside-outside duo we would have loved to see in the cancelled 2020 March Madness.

However, they received no help as Wiggins (7 points) was the only other Terp to score besides the 2 automatic points when we start at 20-20.

The game was closer than the final score indicated, as Cowan's scored with 7:03 left to cut it to 63-60, but they could get no closer.

However, the Badgers played their normal balanced game with only 8 total turnovers.

Kaminsky led the way with 14 points and 10 rebounds, but all 5 starters had double figures in addition to the 6 from showalter and another 8 from Jackson off the bench. 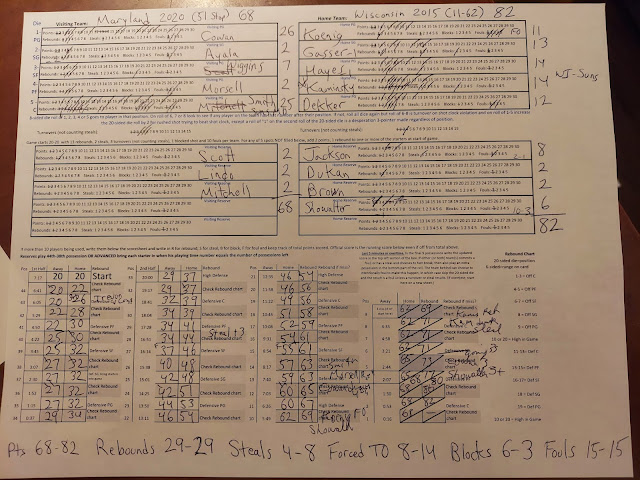 We did not plan to line up the conferences, the seeding just worked out that way.

One semifinal is an ACC semifinal, with UVA's national champs taking on the Louisville 2020 team that nudged Chris Paul's 2005 Wake Forest team 80-79.

With the Wisconsin win above the Big Ten clash, they face the winner of a Big East clash between 2018 national champs Villanova and the one other actual NBA Finals star Bridges against the Creighton team that won our 2020 March Madness title over Duke.

We have no way of knowing who would have one thr tournament that covid ruined, but Creighton was by far the hottest team entering the tournament - having risen for  23rd to 7th in the final month of the season, so the threes should be flying.