This blog is probably along the lines of the meme about being so excited about creating a new cool spreadsheet and then realizing none of your friends or family care - but here goes. Does anyone else love play board games -  in my case Statis-Pro baseball - except for wanting to add a few new players without cards or replacing a fringe card for someone who put up ridiculous stats in a handful of games? Maybe not, but ...

In 1981, I started my Statis-Pro season only to discover that A's back-up Mickey Klutts' had a 25-41 home run range - 13 home runs every 64 times the play was on his card. Despite hitting 14 CAREER home runs that made him the greatest Statis-Pro card in the game because he hit 5 home runs in 48 plate appearances that year.

In the game this made Klutts a much greater hitter than Hall of Famer Mike Schmidt, who despite winning his second straight MVP, and leading the league in home runs that year and five times in a seven year stretch, had four fewer home runs on his card than Klutts with a 28-38 range. Schmidt's lifetime Wins Above Replacement of 106.9 indicates he was worth 107 extra wins to his times - the 25th best total ever. Klutts career war was 0.2,and yet he was the greater player in the Board Game.

After a lifetime of wrestling with how to create realistic replacement cards for fringe players like Klutts, or add a few new cards for rookies, players who were injured the previous season, or batting pitchers without the absurdity of them hitting better against great pitchers (PB 2-9 who keep it on their own card) then terrible pitchers (PB 2-5 who put the action on the pitcher at bat card) - the answer suddenly became crystal clear.

Here is a revised copy of three standard cards you can use to quickly create any of these "fringe, fringe" player cards to fill a current roster without wasting a lot of time. Fill in the first card for any player new batter assuming his OPS was at at least .425 (this card is a .550 OPS) and the second card can be used for almost NL starting pitcher for his turn at bat BUT DO NOT REFER TO THE PB CARD, GO STRAIGHT TO THE RANDOM NUMBER ALWAYS ON HIS HITTING CARD.

For the pitching card on the right, all you need to do is pick the closest projected ERA (or FIPs) along the bottom, write in the correct PB: 2- number at the top (though it can be 4-7), mark if the pitcher is right-handed or left-handed and you are set.

For any new batters card, simply look up their projected OPS or for a pitcher I suggest using the card in the middle unless he has at least 50 lifetime at bats (an NL starter) so you can use his realistic career OPS.

Presumably any new batter would project to have a projected OPS of .425 or higher and can use the card to the left rather than the card in the center. Simply red down the left column of the table below to find the OPS closest to his OPS and then read across for the and the only adjustment you will need to make is to the end of the home run range and the beginning of the strikeout range. If his OPS is closest to .500, you take away the 26 Home Run and 26-48 is the strikeout range. Closest to .550, the 26 becomes a Home Run. Closest to .600 and 26-27 becomes a Home Run etc. Basically the way the card is set up every new homer with nothing else changing adds 50 points to the OPS (see the actual OPS each card would project out to the right, it is very close.

If a pitcher hits at an .425 or better OPS then you pick the hitting card adjustment like you would for a batter. For most pitchers at bat you will just use the center card above which reflects a typical NL starting pitcher who hits some but has an OPS around .200. For an AL pitcher or NL reliever who unexpectedly finds himself at the plate, take away two of the hits as a single only on an 11 or 12 to go along with a walk on 51 and hit by pitch on 52 accurately reflects the probably OPS.

The true breakthrough in this chart is calibrating the pitcher's batting (or a really terrible hitting batter I guess) assuming you the entire PB process and simply use the Random Number to refer straight to the pitcher at bat card so as not to penalize the  PB: 2-9 pitcher by keeping the action on his card instead of a typically terrible hitting pitcher card.

Still use the chart to adjust the middle card above, but note that this works out conveniently that any batter with a projected OPS of .424 or less calculates to no hits in the 20s so it is easy to remember and play. If a pitcher's OPS is about .400 then the RN goes straight to his card and he hits a home run on a Random Number of 18. If his OPS is closer to .450 then you check the RN first, and if on the opposing pitcher's card he would average getting a hit on an 11-23, but if it is on his card he hits a home run on a 21. Every 50 points lower than .400 and he is still hitting just on his card with no PB, but every .050 points higher than .450 and he moves up the regular new batter chart with a card that comes into play when the PB is off the opposing pitcher's card. Keep in mind the actual OPS in the far right column is calculated for 64 straight at bats on the pitcher's hitting card up to that .400 OPS, 18 HR mark, and beginning with the .450 OPS, 21 HR card it is calculated per 128 at bats with 64 on this hitting card and from the opposing pitcher's card 11 singles, 7 walks and 46 outs. 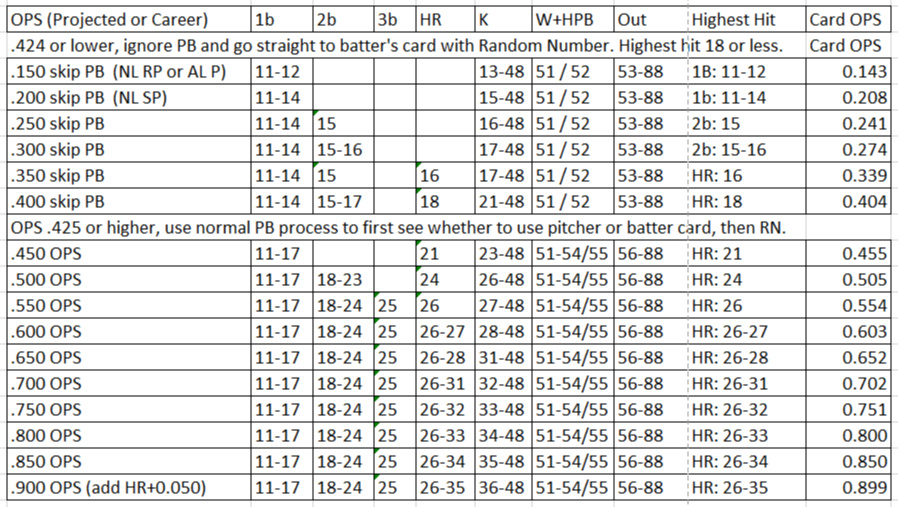 While the charts above let you calculate a card that accurate measures the overall hitting ability or pitching ability of new players, we did want to calculate actual numbers for immediate impact players. Here are the new batters who could have a big impact coming in from Japan or Cuba, or coming back after a year away for injury:

Key pitchers cards will follow.
Posted by JohnPudner at 5:02 PM