After a back and forth battle, Emeka Okafor erupted for 13 points in the final 3 minutes of regulation and overtime to lead UConn to a 82-78 win. The big key was him hitting all 5 free throws in that stretch despite being a 50% free throw shooter (1-10 free throw made, 11-20 free throw missed, meaning only 1 in 32 times would he make 5 in a row).

UConn led 66-61 with less than a minute left, and Duke went to the 3-point strategy in a desperate attempt to rally.

Duke Played for 3-point shot. As the Value Add Basketball Instructions state, a team can try for 3-pointers by adding one to their 3-point made range for every one number they take off the highest 2-point made range and turn into a missed 2-pointer - and you can not more than double the number of 3-pointers made. Thomas Hill (no relation to Grant Hill) normally makes 3-pointers on 1-2, then 2-pointers on 3-9, so when playing for the 3-pointer his 3-pointer range doubled to 1-4 (thus the 3 rolled was a 3-pointer rather than a 2-pointer) but because they were in the 3-point offense that means the two he added to first range lowers the 2-point range from 9 to 7, meaning a 5-7. When you do the math, you are losing points long term because you are giving up 2 points on missed 2-pointers for every 1 point you add by turning the 2-point shots into 3-point shots. It worked as T. Hill hit the 3-pointers on a "3" to make it 66-64.

Duke then played to foul. Also stated in the rules, you can go for the turnover or foul deliberately. When you do this, you roll three of the four dice - but do not role the 20-sided dice because the play will always be a turnover or a foul. In 8-sided die roll was a 5, giving the ball to Okafor, and even though they did not get a turnover (41-43 is a turnover on Okafor's card, and 11-16 was a steal on Laettner's card) they lucked into Okafor being the fouled player. He only hits on 1-10, but he made them both to make it 66-64 UConn, and as it turns out Duke would have won the game if he had missed either one.

Duke took the 3-point offense off for their final trip. Okafor actually blocked a Duke a shot in the closing seconds, but the rebound roll was a a 3 on the 1-20 die, which means Laettner had a chance to grab the rebound with his 1-5 offensive rebound and the 6-sided die came up 4 to mean he did secure it (on a "6" it would have gone to Okafor) and then he passed to Grant Hill, who scored the game-tying basket at the end of regulation to make it 66-66 and send us to a 5-minute overtime.

Several of Ben Gordon's 5 steals were key to UConn taking the lead, and Okafor finished with a game high 29 points.

Grant Hill led Duke with 22 points while Christian Laettner added 20 with 10 rebounds. Laettner is also the only center with a 11-16 on steals, and he came up with 6 steals. 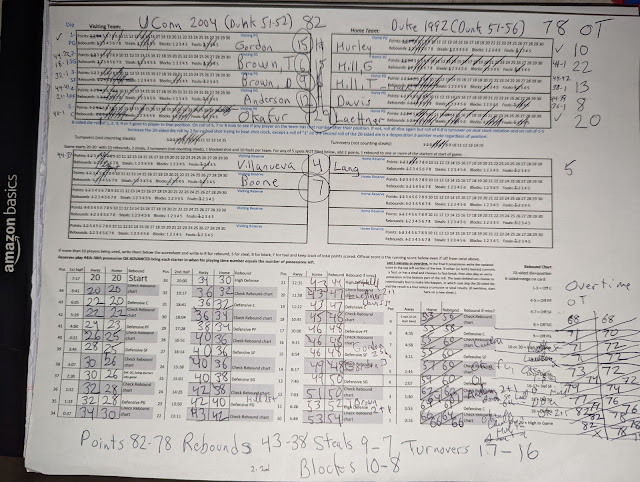 Posted by JohnPudner at 2:55 PM