Currently we have instructions to define and print from the google sheet, which you can still do, but this is much easier. Open the pdf link above, find the pages of the two teams you want to play (in my case Barry Bonds' Giants are page 49, while Sandy Koufax Dodgers are page 25.

Print out the Statis-Pro Baseball Instructions and the sheets for two teams and you are ready to play.

A couple of notes - we put the batters in a suggested batting order. We produced a 9-player line-up including a DH, but we also put "-bench" after the player we would sit if the pitcher is batting. Sometimes that is the DH, but sometimes we switch the DH to another position and sit the player at that position. For example, if the Oakland A's are using the DH that is where we put Reggie Jackson, but if pitchers are batting we can't lose his bat, so we move him to the outfield

The blue line or lines are listed after the nine starters. Most pitchers use a standard batting line (or card) that skips the PB 2-12 number to ignore the opposing pitcher's card and go straight to the 11-88 RN. Only a 11-14 is a single, a 15-48 a strikeout, 51 a walk, 52 hit by pitch and 53-88 an OUT. However, if a pitcher had enough at bats and hit better than a typical picture then there is an extra blue line for that pitcher - in this case if Livan Hernandez pitcher then when he comes to his plate he has a much better chance to hit.

A red line means the player did not have enough plate appearances to justify his batting line, so we still use it but if the action is on his card then you add the number indicated to the RN before lookin at his card for the result. The only player who would be both red and blue is Brooklyn Dodgers' pitcher Don Newcombe, who needs to add a +6 to the RN when he bats, which still makes him one of the best batting cards in the game.

Below the blue are the reserves in alpha order. A green line indicates we suggest that against left-handed pitchers you use the green sub in place of a starter with a green line. 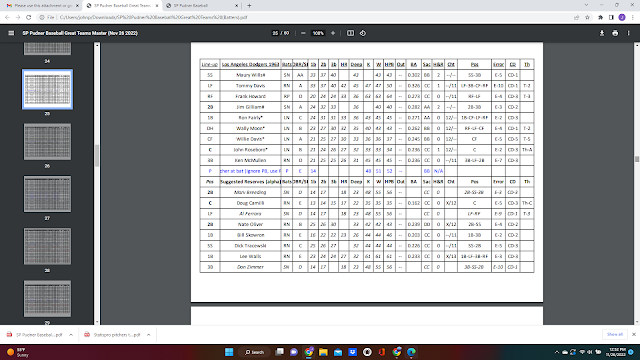 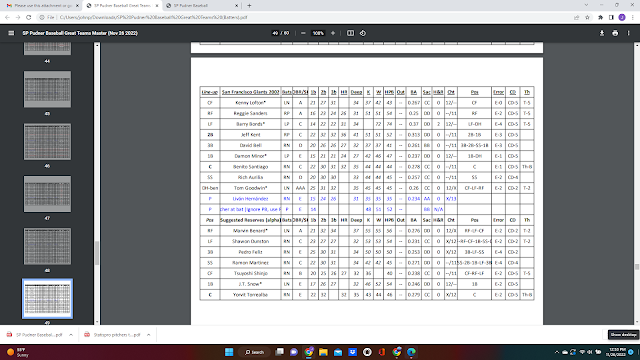 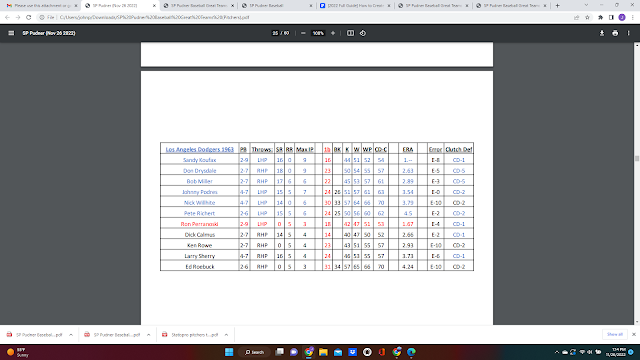 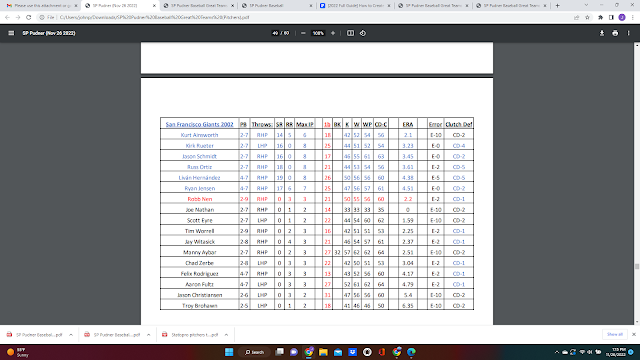