Why are we playing baseball in the midst of the World Cup, Basketball Feast Week and the Rivaly football game of the century between unbeaten Ohio State and Michigan?

As mentioned, one of our readers came up with a great way to produce our pitching cards in an easier to read pdf, and when I went to check the batting cards to do the same - I realized the fielding positions and ratings of the last 12 teams in alpha order, from Pittsburgh 1908 to Washington Senators, had been thrown off.

We fixed them all and now have all batters ordered into our suggested batting order, followed by all pitchers batting cards, and lastly the reserves in alpha order.

See the sheet of all players and game results by clicking here.

The first game we played after these updates gave Milwaukee a chance to get revenge on the 1982 Cardinals, which beat the Brewers for the title, and come back to play the 1957 Milwaukee Braves of Hank Aaron and Eddie Matthews.

The 82 Cards were the last team to make the case that speed was better than power, with 5 of their 8 players with at least speed A ratings, and Willie McGee a rare AA and Lonnie Smith one of the few players in history with an AAA.

Lonnie broke a pitchers duel in the top of the 6th with a triple and then racing home on a grounder to make it 1-0. However Frank Torre homered in the bottom of the 6th to tie it.

Bruce Sutter came in for the bottom of the 10th, but he was only a PB 2-7 that year (above average but hittable), and Crandall and Logan both doubled as the only batters he faced for a 3-2 win.

Ozzie, Lonnie, Hernandez and Oberkfell all singled in a 3-run 3rd inning and the 3-0 lead held until the 8th when Hank Aaron hit a 2-run homer. However, the Cards last available pitcher Jim Kaat pitched the 8th for a save and 3-2 win. In our 20 all-time great team games so far, teams are averaging 4.0 runs per game.

Here is the score sheet, what the player sheets look like with the game one starters, and then a broader shot of how I set up the game. 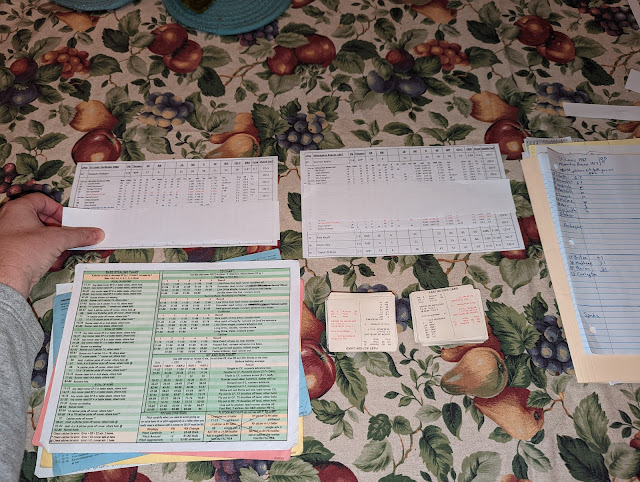 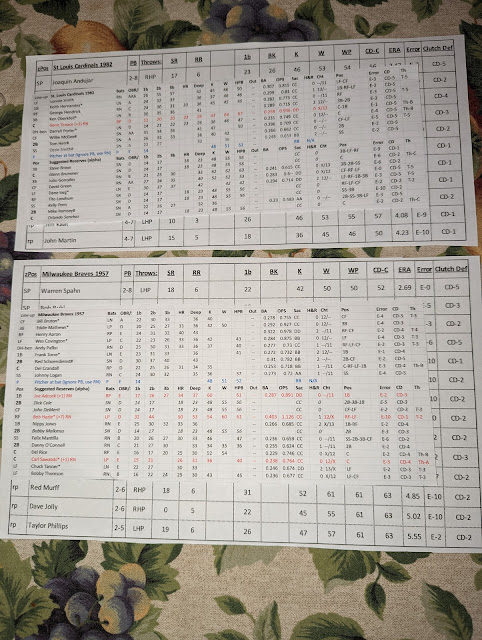 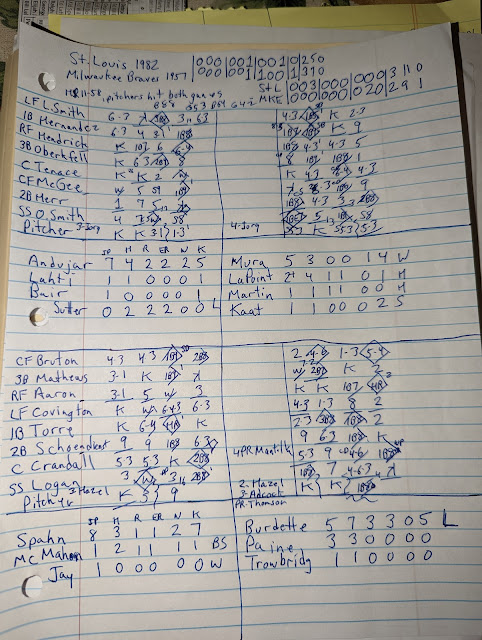 Posted by JohnPudner at 3:18 AM