Thought this all-time post would be in time for the ESPN top 10 tipoff between Baylor and UCLA, but our game went into OT.

Jared Butler harassed the 1967 UCLA team with 5 steals to keep them from getting it inside to Kareem Abdul-Jabbar some of the time, and Davion Mitchell hit 5 three-pointers to help Baylor build a 63-52 lead with 5:40 (10 possessions) left in the game.

However from that point on one of John Wooden's best champion teams dominated the final five minutes as both Kareem and Lynn Shackelford crashed the offensive glass as UCLA chipped away.

Baylor did not score their last 5 trips down the court, and on the final one Lucius Allen saved the game with a steal and fast break basket to tie it 73-73 and send the game into overtime.

The final minute of overtime was even crazier. Kareem scored to give UCLA a 91-89 lead with Baylor only having one position left.

MaCio Teague avoided a turnover (dice roll was a 42 which is a turnover for almost every player, but McTeague is a 41-40 which means he doesn't turn it over on any of the potential turnover rolls of 41-46). If he had turned it over, but because he did not turn it over, we looked at his 20-side die roll which was a "3" and thus in his 3-point made range of 1-3 to make it 92-91 Baylor.

That left a final trip for UCLA. Johnathan Tchatchoua then came up with a potentially game saving blocked shot, but when we went to the rebound chart Kareem grabbed his 14th rebound and and the scored his 38th point before the buzzer to give UCLA a 93-92 win in OT.

Here is the crazy score sheet as Ingo back to watching the ESPN game where Baylor leads UCLA 19-18 as I post this.

Click on the game to play yourself - it contains everything you need to play the Value Add Basketball game, which lets you pit any of 136 great all-time college teams against each other. To pick your two teams it is best to click on this Google doc and print the pages of the teams you want (each team is one page). I track my games on this google sheet, but play your own for free! 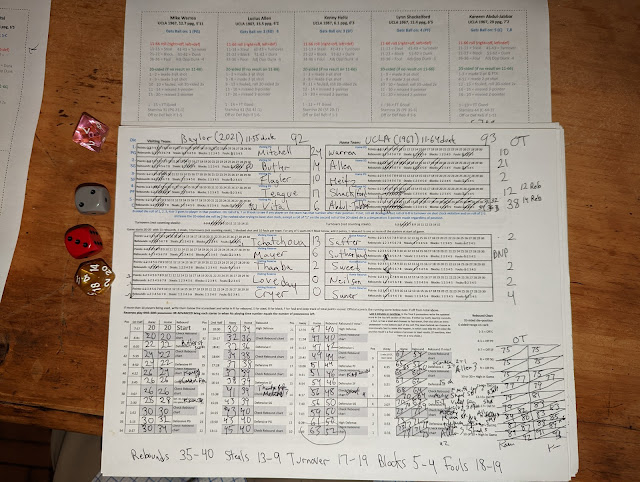 Posted by JohnPudner at 3:14 PM