Mike Schmidt's 1980 Phillies swept the 1909 Detroit Tigers 12-8 and 4-2 in a Statis-Pro game after the current Phillies fell just 2 games short of the real World title Saturday. The other 2 all-time top 100 players considered by some the nastiest superstars, matched up three times with Ty Cobb getting the better with a double, single and 4 RBIs against Steve Carlton, but Carlton got the win in a slugfest.

Dick Ruthven settled things down with 8 innings, and he doubled with one of the best batting cards of any pitcher in our game in a 4-2 win. The box score and how I set up the sheets is shown below. I lay the top of each team's batters just below the pitcher in the game at the time, then a business card under the batter at the plate. This was the set up when Carlton was facing Cobb., Whose home run range is 46-47 in addition to a deep drive on 48-52. 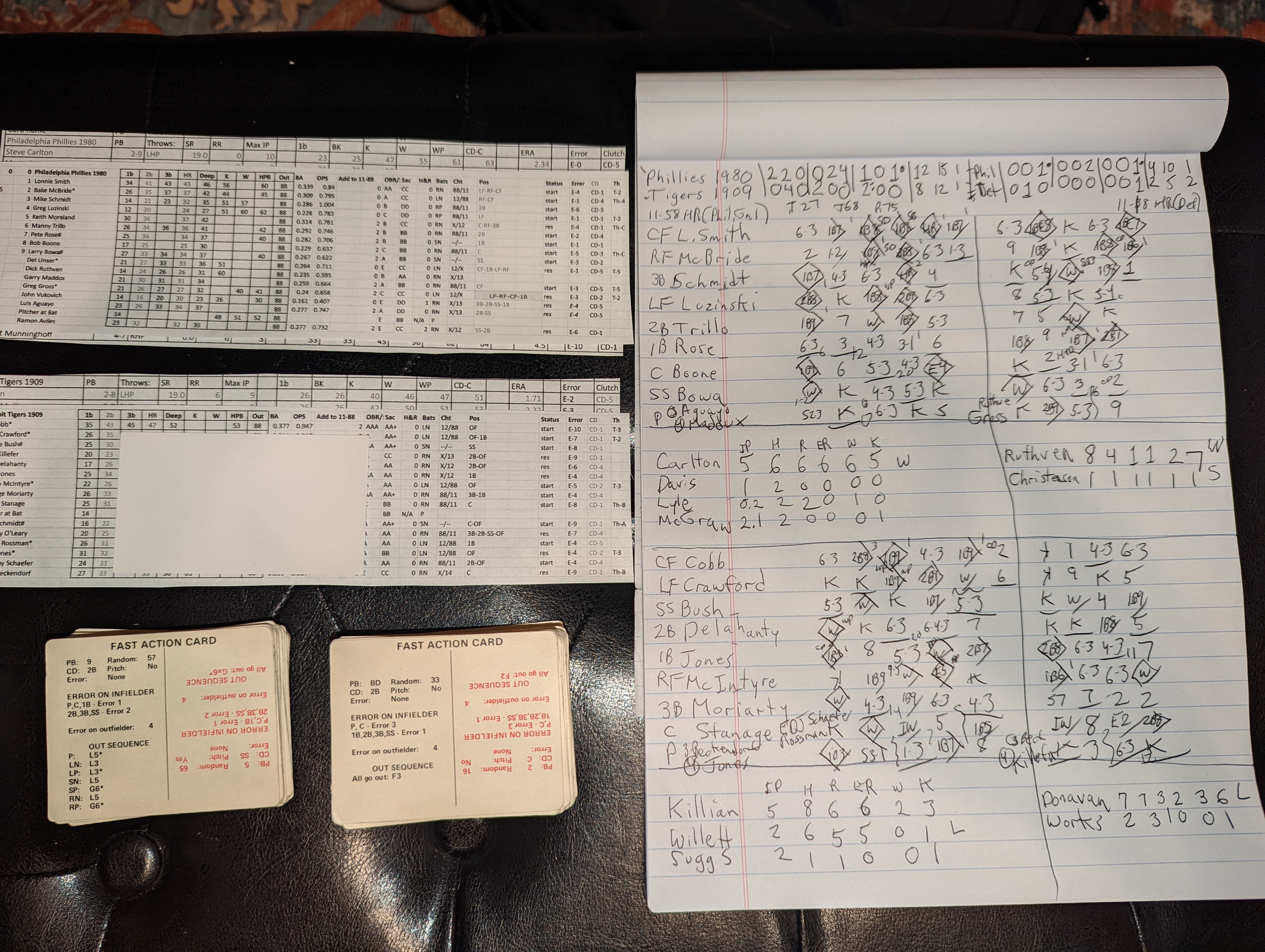 Phillies fans will remember the incredible turnaround to win the NL title, despite falling short in Game 6 of the World Series Saturday night. Despite being a happy Astros fan myself, I decided to remember another great Phillies team in a Statis-Pro game after the Series ended.

In my Eastern Division play, the 2008 Phillies World Champs already split against Honus Wagner's 1909 Pirates world champions, losing 1-0 then winning 5-3 in 11 innings. Tonight we played the other Phillies champions, against the team that lost that 1909 World Series - the Detroit Tigers. By clicking on the google sheet of the 60 great all-time teams, we see the following on the team page.

The chart also shows that the pitchers hit in either park, and in the first game a DEEP drive is a homer of 11-58 in Philadelphia in 1980, but only goes out on an 11-18 in the second game played in Detroit in 1909. We have a separate Division for all the New York and Boston teams, so they are not in our "East."

When we go to the pitchers sheet we see the Phillies will also start the 58th best player of all-time in pitcher Steve Carlton. Carlton has the best PB 2-9, but also his maximum innings he can face is 10. The Tigers ace is Ed Killian who is almost as good with a PB 2-8 and can go up to 9 innings if his SR endurance does not run out. The blue pitchers are starters, the red is a closer, and then the black font below are relievers - all in order from best to worst. The Tigers do not have an ace reliever as in 1909 when the best pitchers all started and the relievers were there if they couldn't finish the whole game.

A picture of the scoresheet will be added after the game.

Posted by JohnPudner at 8:47 PM