The "untouchable" 1996 Kentucky team featuring nine future NBA players led by no more than 1 point throughout the second half until pulling away the final 7 minutes.

Nigel Williams-Goss (18 points, 3 steals) kept the Zags in front until the final stretch, but Kentucky dominated the boards 40-28 in the win.

We notices a few things in dusting off the game after the baseball season.

I printed out the drop box version of the cards this time instead of the normal Google docs cards to double check.

The Google docs player cards are the most accurate as one of the Dunk ranges on the drop box version are slightly off. Kentucky's 51-66 dunk range is the accurate one and you can see I wrote that on the cards.

Also this revealed the drop box print was cutting off the outside margins, so I had to look on the screen and write in the foul range and shooting ranges for all players.

Also I usually use coins to keep track of who is in the game, but this time just wrote in who got the ball on the rolls of 1-8, then crossed off those numbers when a new player came into the game. If you follow our suggested rotations at the bottom of the cards, the final stretch of the game is played using the top row of 5 players unless someone fouls out or you want to change strategy to bring in someone better at 3-point shots or steals.

Finally, if you follow the chart in the game Kentucky's dunk range calculated to a 51-66 and Gonzaga to a 51-56 once cross referencing with the opposing defenses dunk adjustment. The average in a game is 51-53, and at the start of a game you can choose to adjust both teams by the same amount - and we chose to lower them both by 3 to make it 61-63 and 51-53.

Click on the game to play yourself - it contains everything you need to play the Value Add Basketball game, which lets you pit any of 136 great all-time college teams against each other. To pick your two teams it is best to click on this Google doc and print the pages of the teams you want (each team is one page).

If you do not use Google docs, you can instead pull up this pdf in drop box, but if you do that or if you printed cards previously you should check to see if a team's dunk range was adjusted by pulling up this chart. 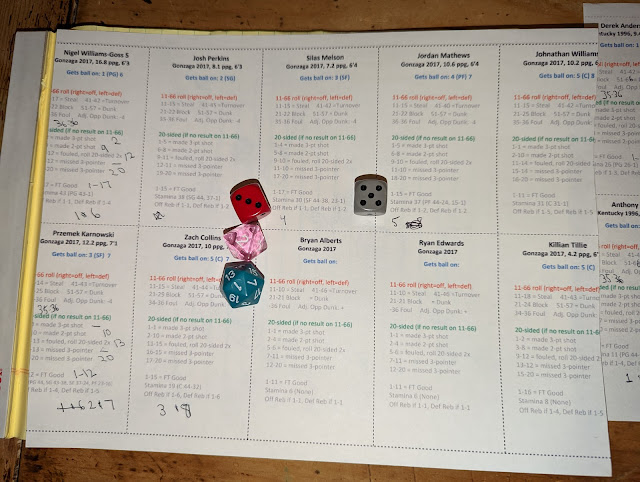 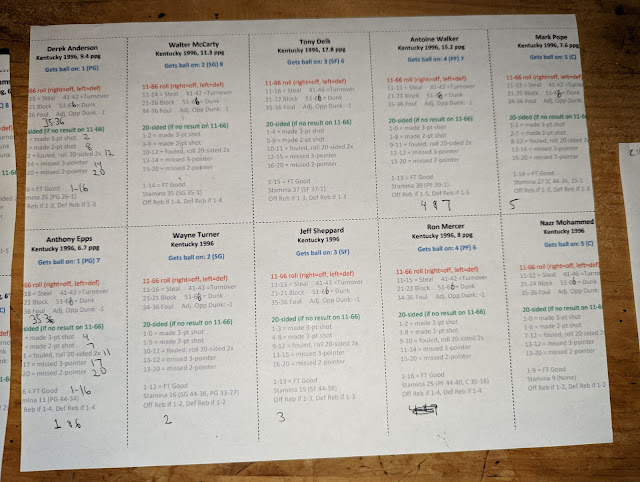 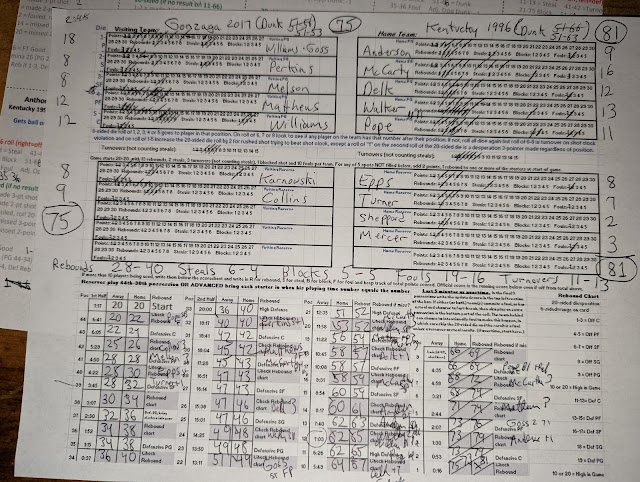 The Value Add Basketball Game is our most popular blog by far on www. pudnersports.com with more than 62,000 unique visitors. We have two separate sets of Statis-Pro Baseball Instructions, which have been viewed by more than 20,000 total. Here are the top 10 according to blogger. 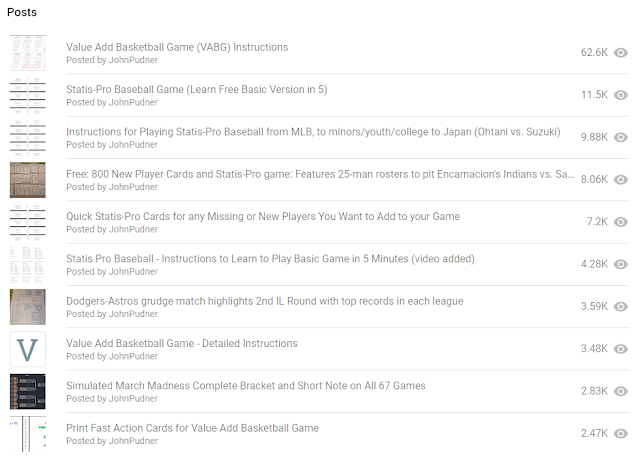 Posted by JohnPudner at 2:09 AM