The LA Dodgers fielding and bullpen are not strong in this year's 2022 Projected Statis-Pro Cards, but when a team can average more than 6 runs a game even against the best pitching team in the NL it's enough for a title.

We wrote in the standings on the decisive Game 3 Scoresheet below. Every batter in both line-ups had between 1 and 3 hits during the 3-game series, except for the Dodgers two leadoff batters Trea Turner (5 for 13, 2 steals and a homer) and Mookie Betts (4 for 13, 2 doubles). There cards are pictured by the scoresheet.

While they won with their bats, the pitching star was Urias, who pitched a lights out gem in Game 1 with 7 innings, 3 hits allowed, 10 strikeouts and 1 walk. The only run allowed was very unearned. Urias bobbled a grounder by the Brewers player by the same name (Urias), and later catch Will Smith allowed a passed ball for him to score the only Brewers run in what would be an 8-1 Dodgers win.

Just like in the semifinals, the Dodgers lost Game 2 to allow the Brewers to have their ace on the mound for the deciding Game 3.

However, Turner walked and stole second and Betts singled to start the first inning and later both scored against Burns to make it 2-0. With the Brewers bullpen stretched in the Game 2 win, even a tired PB2-7 Burnes (down from PB2-9) was the best option to start the 7th with a 2-2 tied game and try to get to the best reliever in the game, Hader, but Turner blasted a 2-run homer to make it 4-2. In the 8th, they likewise got to a tiring Hader as Bellinger doubled, Taylor doubled him home, Turner singled him home and then Betts hit a deep sac fly that just missed a home run (DEEP drive of 27 held in by the Dodgers ballpark range of 11-26 for home runs.

The Brewers did rally for two in the 9th to cut it to 7-5, and had runners on 1st and 3rd. Renfroe came to the plate as the winning run - having homered the previous at bat, but he lined out to the Dodgers last reliever Vesla to wrap up the Dodgers title.

We are actually playing the AL season this year, but our NL commissioner has a crazy busy work year and wanted to at least get an NL tournament in to see the teams. The playoff bracket is listed below and now we will return to the AL season.

All 2022 Projected Batters (49 pages, 9 cards to a page) and All 2022 Projected Pitchers (62 pages, 9 cards to a page) are needed to play the Statis-Pro baseball Game, but we did catch one adjustment to the PB rating of pitchers based on the team on which they played. You can either use this link which has the correct numbers for all the pitcher cards or print out the cards from the link above and then adjust all the pitchers on certain teams by referencing this blog. 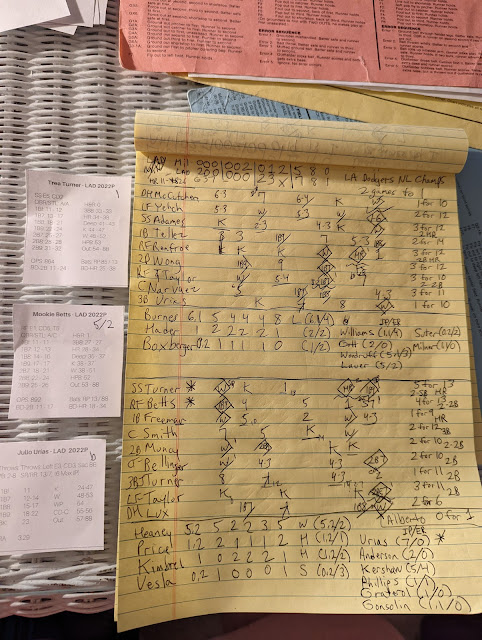 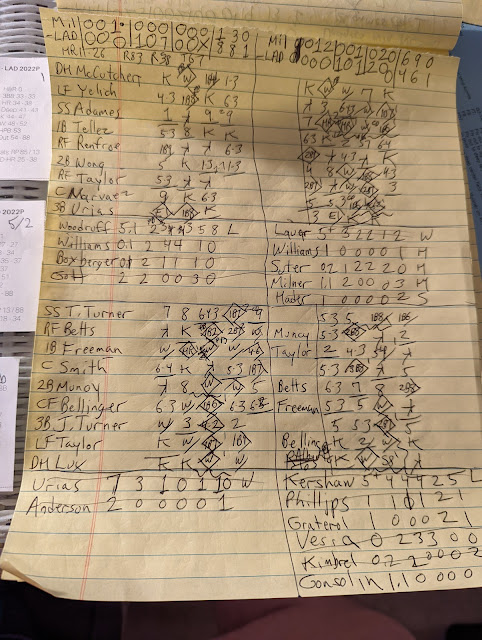