We generally are all baseball from the end of March Madness to the end of the World Series - but we dusted off the Value Add Basketball Game while watching the NBA Finals.

Horford's 3-3 Florida vs Curry's 1-3 Davidson. With Game 2 of the NBA Finals on the TV, we pitted a star from both Golden State and the Boston Celtics against each other. Stephen Curry's 2008 Davidson team face Al Horfords Florida Gator's 2006 team which one the first of two national titles and was one of 33 teams with an adjusted dunk range from the original cards (click here for all adjustments).

The two teams actually played a couple of years ago in my game and Davidson stunned Florida 68-52, one of the reasons Florida dropped in our rankings with a 3-3 record. So a chance for Horford revenge. (here are all results in our game to date). It was actually the only win for Davidson, which also lost to 2004 Oklahoma State, Anthony Davis and 2012 Kentucky, and the recent 2019 Auburn Final four team.

At tipoff remember the 8-sided die gives the ball from left to right to any player with any coin. On a 6-8 rolls you start over on the left but only look at dimes, so for Davidson at tipoff Richards gets the ball on a 6 and Curry in either a 7 or 8. 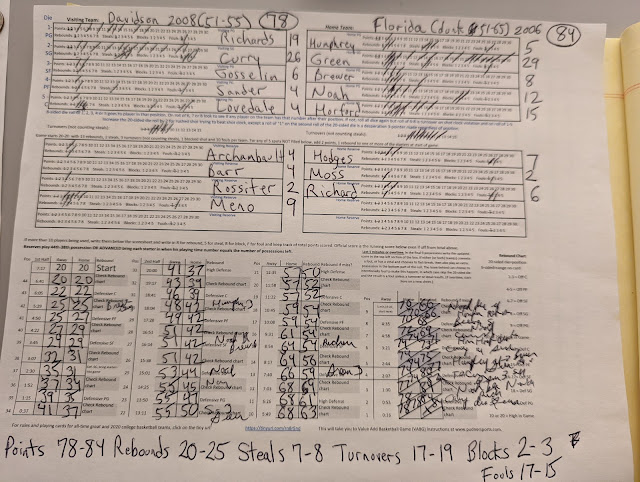 Florida trailed by double digits most of the game due to turnovers and the fact that Joakim Noah's endurance is a little low for a starter and he does not play the first 14 possessions (possessions 44-31 counting down). Steph Curry (26 points) had Davidson up 70-63 at the 5 minute mark.

During the last 5 minutes there are 9 possessions, BUT anytime there is a foul or steal and fast break for either team on a possession, in which case you add a possession below the diagonal line at that possession.

Noah drew a foul with 9 possessions (5 minutes) to force that extra possession, hit the first free throw, and when he missed the second free throw Al Horford grabbed the rebound to draw the Gators within four points for the first time since the beginning of the second half, 70-66.

With 8 possessions left Corey Brewer came up with a steal, and Noah dunked at the other end to make it 70-68.

Lee Humphrey then stole a pass and started a fast break that ended with a Brewer dunk to finally put the Gators ahead 75-74. The key moment may have occurred when Curry missed a 3-pointer, and then fouled Green - the only strong free throw shooter on the Gators squad, who hit all three of an 80-74 Florida lead.

With four possessions left Noah practically sealed it by blocking a shot that would have gone in (we only know this in the game where Noah's 21-28 blocked shot range was the best in the game) and then he scored at the other end to make it 82-74.

Curry did one more 3-pointer and a free throw toward the end but Florida dribbled the game out to register the 84-78 win and avenge an upset a couple of years ago when they played the game.

Posted by JohnPudner at 6:22 PM