"Are you Grayson?" Chance Meeting with With Best Value Add 2018

At baggage claim in an airport today, the day of the NBA Draft coincidentally, I looked up and saw a familiar face. Not wanting to invade personal space, I waited, but luckily he saw his bag passing by, came over to scoop it up - giving me the chance to say, "Are you Grayson?"

A little surprised he gave a big smile and answered politely that it was in fact Grayson Allen.

And so it is, Value Add goes by the numbers not whether or not fans like a player or not, and here is his history.

Grayson was credited for being the spark off the bench as a freshman to win the 2015 title, and clearly a sharp kid as he was named All-Academic, All-American.

His sophomore year he was named 2nd team All-American as one of the 10 best players of 4,000 in the country by The Sporting News, and Value Add agreed calculating him as the 10th most valuable in the country.

Junior year was down, but Senior season he finished as the most valuable player per game in the country - but let me explain after viewing his year by year:

You see his No. 10 ranking in 2016, and even the 208th ranking is top 5% of all players and freshman 792nd is top 20%. But focus on the 38th place ranking, already top 1% of all players, but in fact the notes show he only played in 26 of 37 games that year. Since players get a 0 for any game they can't play, you use this simple formula - team games ÷ players games played x value add ranking = value add per game.

Running the formula you see Grayson actually improved Duke 10.60 points per game, which actually made him the most valuable player in the country per game - edging out West Virginia's Jevon Carter and Villanova's Mikal Bridges as MVP. 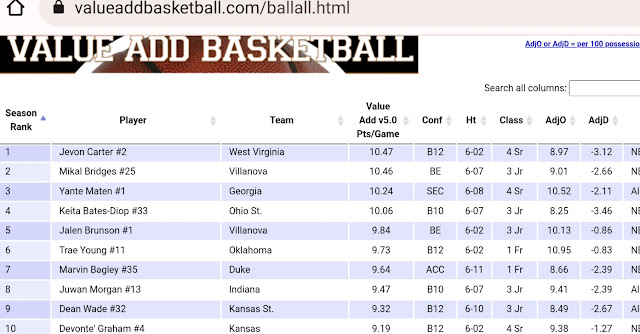 Posted by JohnPudner at 5:34 PM