The Brewers used late 2-run homers to rally from behind twice against the Padres. The consecutive 1-run wins advance the Brewers to face the Dodgers-Braves winner for the NL Statis-Pro baseball game title.

Blake Snell was brilliant for the Padres in Game 1, yielding only a 6th inning solo shot from Adames to leave with a 3-1 lead.

However the bullpen could not hold it as Rowdy Tellez hit a 2-run homer on a DEEP drive in the 8th and Kolten Wong had the game winning double in the 10th for the 4-3 win. The Brewers hit 2 other DEEP drives earlier in the game - which in Milwaukee are a Homer on 11-48 or sac fly out on a 51-88, but both were caught against the wall on a "51" and "57." However, Tellez drive was a "17" for a no doubter, and Adames was an HR on his card.

Sean Manaea was even better for the Padres with 6 scoreless innings, but in the 7th it was Wong with the game-winner again, a 2-run holer for the 2-1 win in Game 2 for the sweep of the best-of-3. Burns allowed a double and rbi-single to start the game behind 1-0, but finished 7 innings without allowing any other runs.

It was an almost unheard of game in which the Padres faces a PB 2-9 pitcher (best control, keeps on pitcher's card 83% of the time) for all 9 innings. In addition to Burnes being a PB 2-9, ace relievers Williams and the best pitching card in the game Hader are PB 2-9 and pitched scoreless innings in both games. 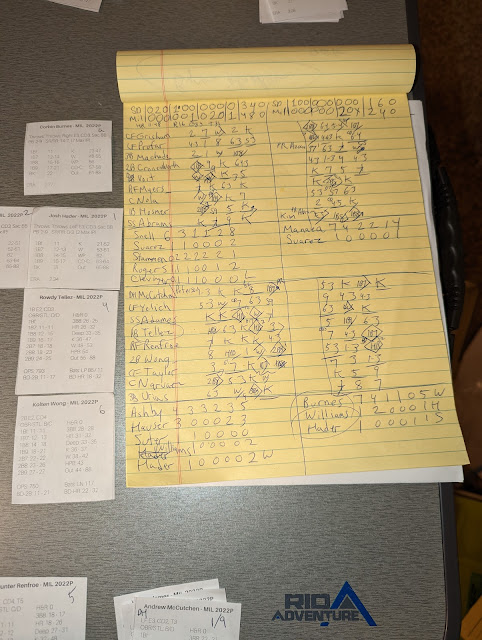 Posted by JohnPudner at 8:48 PM