In a battle between two of the top 6 rated teams of all time, Kansas Paul Pierce and the twin towers of 6-foot-11 Raef LaFrentz and Scot Pollard helped Kansas 1997 out rebound Duke 2001 on the boards 36-27.

The back court was just as dominant with both Jacque Vaughn and Jerod Haase had four of the teams 12 steals, and all five scored in double figures for a 77-66 win in our second semifinal.

Shane Battier responded with 26 points, and Jay Williams had 16 points and opened the game with one of his three steals, but it was not enough.

We had hoped the NBA could have a Game 7 today, so we could have our Final Four the same day, but Kansas 1997 will face Michigan State 2000 for our tournament title.

Both of these teams and Duke were left out of the original 96 the tournament because we only allowed each school to have one team per century in that batch, and we used Kansas Wilt Chamberlain team and Michigan State's Magic Johnson team from the 20th century. We probably should have used this Duke team in the original 96, but the 2001 season was a bit lost between the 20th century and the start of the www.kenpom.com era and we went with Jon Scheyer's team from 10 years later. 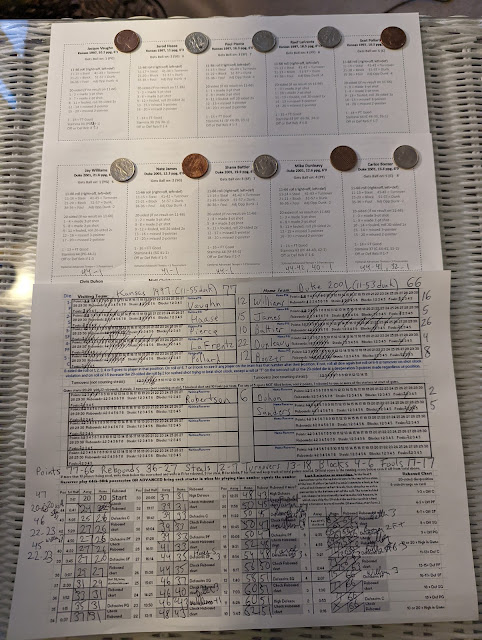 Posted by JohnPudner at 6:07 PM