As we set up NL Statis-Pro semifinal, we saw some players were added to the roster since the Braves and Dodgers last played in our game a month ago. If you do not see a player you need to add, you go to this link for pitchers, and this link for batters to find the numbers to put on the card. If you can't find a batter on that sheet, you can look at the all batters sheet (including those who started the year inactive). This is only if you do NOT see the player on the main projected cards produced for the season on the links on the paragraph below.
All 2022 Projected Batters (49 pages, 9 cards to a page) and All 2022 Projected Pitchers (62 pages, 9 cards to a page) is the only other thing needed to play the game, though more detailed instructions appear in this Statis-Pro baseball Game Rules.
We also take players off the Statis-Pro team if they are on 60-day DL. For the Dodgers they lost only one player - but it was a huge one in Walker Buhler due to his surgery for bone spurs. The only additional pitchers they picked up were Tyler Anderson (a below average PB 2-6) and a PB 2-5 Yency Almonte.
While the printed cards look nice, I just write out the missing cards based on the extra card sheets as shown below. 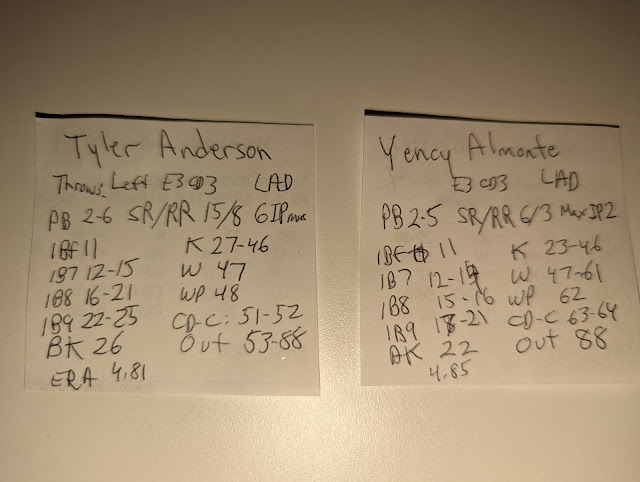 The Braves had the most roster changes we had to update from when we played them earlier. Four players we were able to add were Ronald Acuna (no longer on 60-day DL though he actually has a new injurty), Michael Harris II, and pitchers who had cards but did not have them with the stack I used for the Mets series - Jackson Stephens and Will Smith. 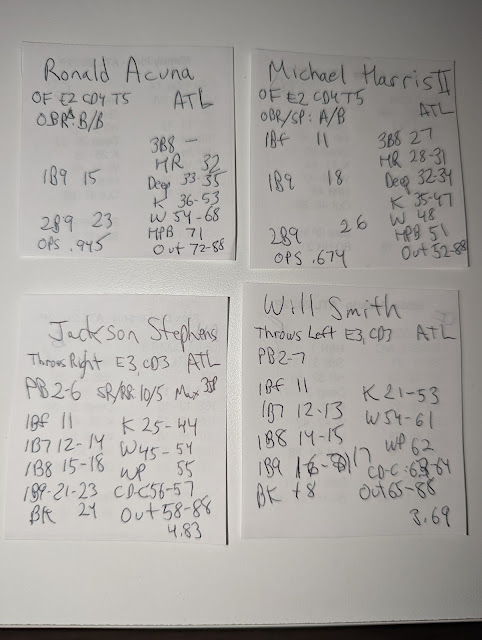 The Braves did however lose four players.
With those in place, we set out to play the best-of-3 to determine who would face the Brewers for our NL title.
Posted by JohnPudner at 8:04 PM