The flow of the game with new simple Fast Action Cards on this pdf. We suggest you print all 20 pages TWICE and cut and mix them all so you will have plenty of cards to play at least one game without reshuffling.

2. On the 2nd card, read the second number (Random Number 11-88) to see what happens on that card. If noone is one base, change any BK, WP or CD on line 2 to an OUT. On a K, W, HBP or 1B on the pitchers card the result is settled and move back to #1 for the next batter.

3. You only use the 3rd number f the result is an OUT, to see where the ball is hit, and if there is a hit on the batter's card just to see if there is a chance of an error (E?). On an out one of these can happen:

G - DP - means a double play if a man on 1st base, with any runner on 2nd or 3rd advancing OR the defense chooses to hold all unforced runners and just throw the runner out at first.

Gx - lead runner who is forced out, and unforced runners hold.

Ga - batter out at first but runners advance.

E? - check 4th number on next card for an error, and if no error batter is out and runners advance. (if this occurs after a single on the batters card, then check that fielder for an error).

4. The Error Reading on the 4th card is only used if there is a possible error (e?) on line 3 after an out or hit on a batter's card. If the fielder's E number is in the range on this 4th line then everyone is safe in an out or gets an extra base on a hit. Flip for another 11-88 and if the number is 61-88 give batter and runners one additional base for a throwing error. 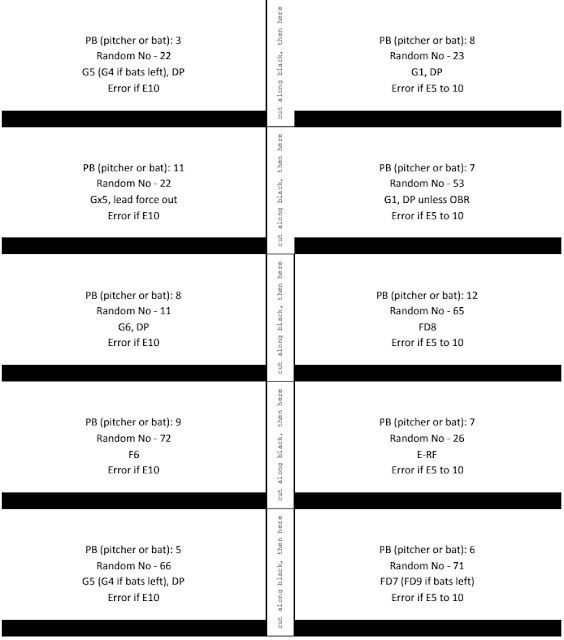 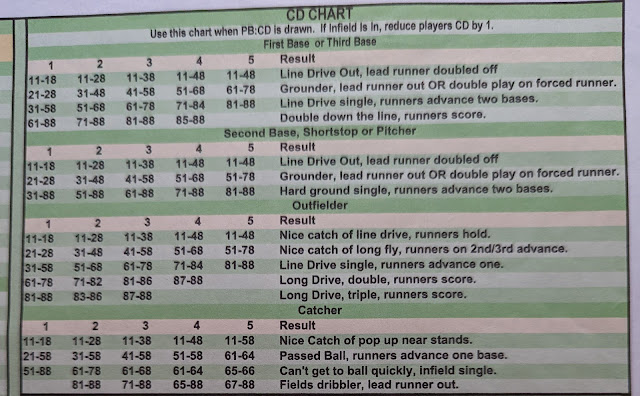 Click here for the new and improved instructions and new 609 pitcher and 619 batter player cards now.
PARTS NEEDED. Playing Statis Pro is as easy as A, B, C. The following 2-part tutorial video (Set up of game video then 13th inning of Dominican Republic vs Puerto Rico) gives a quick 10-minute visual of how you play the game based on the basic instructions in this blog and a photo of the setup here.

A. Player Cards. You can try the game for free using this sheet of all projected 2020 players that look like this:

However, while don't sell anything, we suggest once you've tried the game you order your own playing cards and game by clicking here for basic cards (batting card very accurate, but pitching cards allow too many hits) or the Advanced cards that are very accurate including left vs right precise adjustments but do not play quite as fast as basic cards. It cost less than $20 to buy the projected 2020 cards from him, then I just emailed them to a Fedex Kinkos and for $39 they printed on card stock and cut them for me (I chose black and white cards, so colored calls would be a bit more). 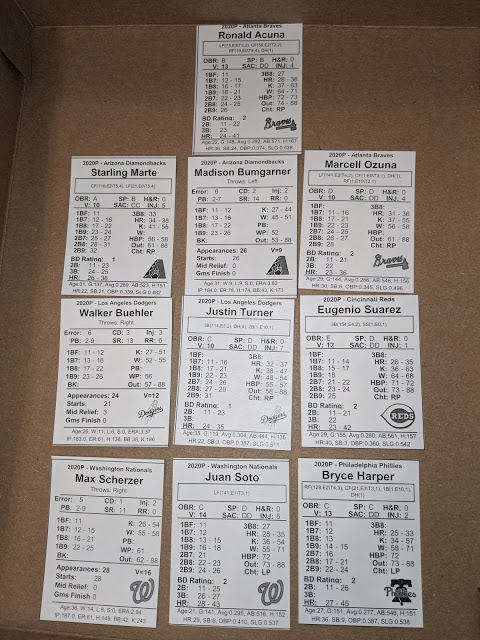 B. Two 6-sided dice are rolled to determine whether to use the pitcher's card or the batters card. The range after the pitcher's PB: 2- tells you what dice combination keeps the action on his card. Scherzer needs a roll of 2-9 to keep the action on this card (see both his card and his row above), so in the roll of 9 on the blue dice below he would keep the option on his own card if facing Bryce Harper - also on the bottom row above. PB 2-9 is the best possible rating, so against almost any other pitcher Harper's card would be used on the same blue roll of 9. If you order a Fast Action Deck of cards they have similar numbers to use instead of the dice, so we line up one of those cards to match. 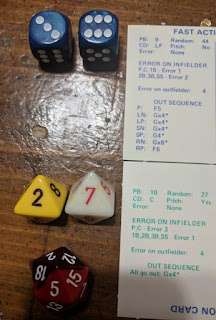 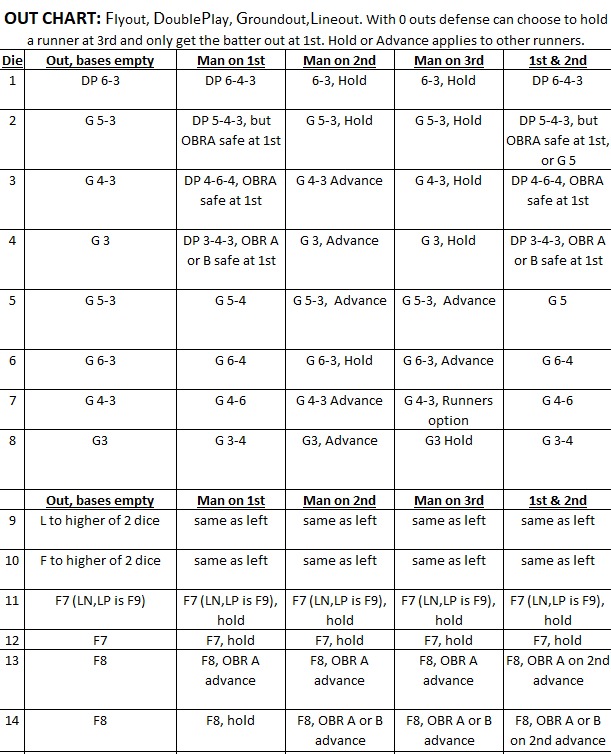 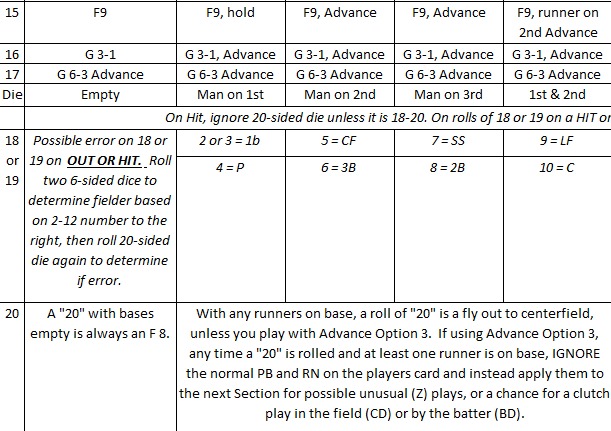 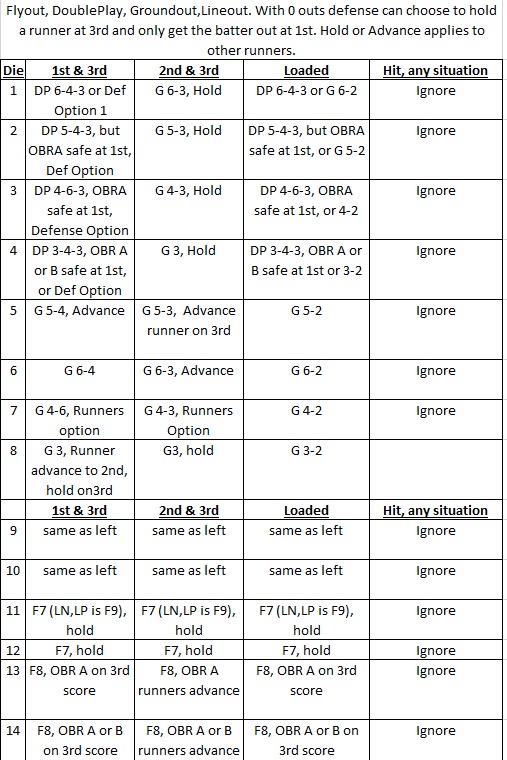 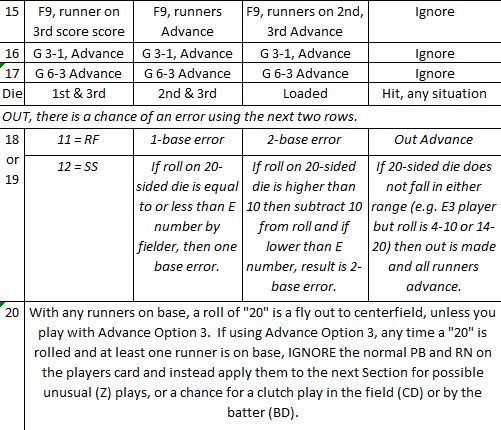 If an RHP (Right-handed pitcher) faces an LP or LN (lefthanded batter), then change a roll of 88 to a single. The same is true if a LHP faces a RP or RN.

However, if an RHP faces a RN or RP, then a roll of 11 is changed to an out. If a LHP faces an LN or LP it is even harder to get a hit, as any roll of 11 to 12 is a strikeout. Note that SN and SP batters (which can also be listed as BN or BP) do not have any adjustments no matter if they face a LHP or RHP.

Add Base running and Bunt Option (Optional in Basic Game)