DePaul 1980 gets Rematch With UCLA (Kareem), Overcomes 31 from Cousy to Advance to Elite 8

DePaul's 1980 team advances to play the school that upset them to end their season as #1 - UCLA. Only this time they need to play UCLA's 1967 team featuring Kareem Abdul-Jabbar in the Value Add Basketball Game.

We have 7 of our elite 8 teams from the new teams we added to the Value Add Basketball Game after our initial 96-game tournament.

The 1980 DePaul team added freshman Terry Cummings to join sophomore Mark Aguirre for a duo that won at UCLA as part of a 25-0 start before losing by 2 at Notre Dame to stop the perfect season. Cummings happens to be one of 3 NBA players I've ever played against - at the Marquette rec center. I played against Dennis Scott and Grant Hill at Worldgate in Northern Virginia.

DePaul was ranked No. 1 most of the season, but like so many of their teams of that era were upset at the beginning of the tournament - this time in a rematch against UCLA.

In our game Aguirre (25 points, 8 rebounds) and Cummings (almost identical 26 points, 8 rebounds)  traded baskets with Cousy as the game stayed within 3 points for a 9 minute stretch until DePaul's Skip Dillard stole a ball and hit a 3-pointer to make it 69-66 DePaul.

Cousy drew fouls several times in the closing 5 minutes to add possessions and keep it close, but DePaul held on 83-78 win the advance to play Jabbar and UCLA.

Holy Crows actually started the 1950 season similar to DePaul 30 years later. They rose to #1 with a 20-0 start. However they closed the season looking more suspect with 4 straight losses against tougher teams at two Ivy League schools and then in 2 blowout losses in the tournament. 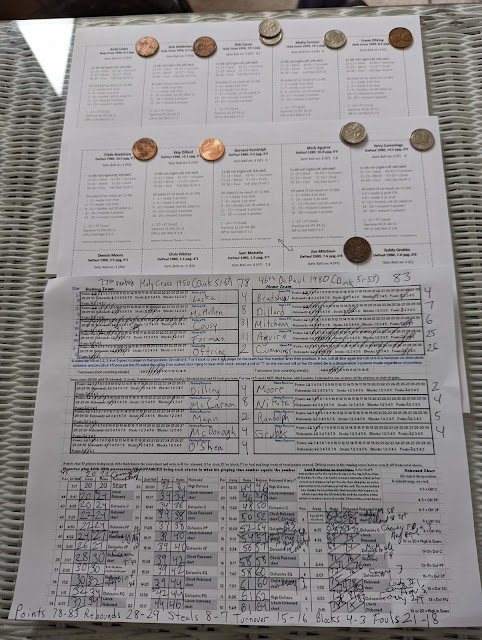