A wild back-and-forth Game 3 deciding game included a 53 minute rain delay dropped Price's PB to 2-6 and Fried's to 2-7, included the Dodgers batting around twice and the Braves sending 10 men to the plate once.

The Dodgers started the game at a huge disadvantage with Walker Buhler's PB 2-8 card not used because he was on 60-day DL. The seemed at an even bigger disadvantage trailing 9-7 after 6 innings with.Dodgers PB 2-7s Graterol and Kimbrel going up against the Braves trio of PB 2-8 relievers Minter, Matzek and former Dodger Jansen.

The trio retired the first 5 in a row but then Trea Turner singled and Matzek walked Muncy and Taylor to bring Will Smith to the plate with bases loaded. His former battery mate Jansen was forced.to come in to get the last out of the 8th, but Smith hit a grandslam homer to give the Dodgers their final 11-9 margin.

The Dodgers win the 3-game series in our NL Statis-Pro tournament and will now face the Brewers in a 3-game series for the title. 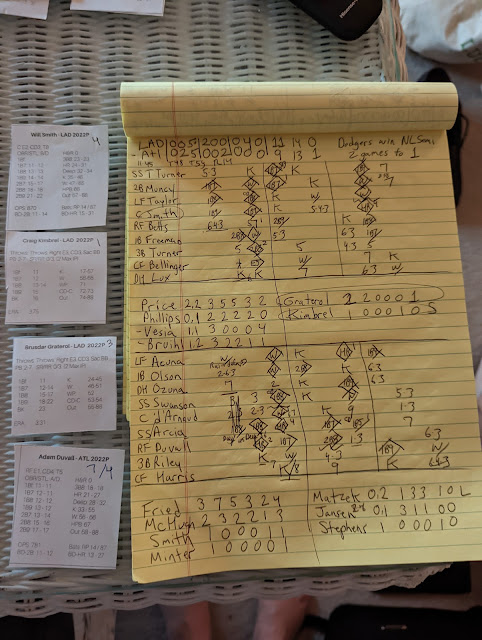