Dodgers, Braves Crush Each Other to Force Game 3

Freddie Freeman had hits his first three at bats against his old teammates to back 6 shutout innings by Clayton Kershaw in a Dodgers 8-0 blow out of the Braves that happened to coincide with the Dodgers beating the Braves on TV.

Jansen then turned the tables with a 4-out save against his old Dodgers team, which could be a disaster for the Dodgers since we had to take the card of would-be Game 3 Starter Walker Buhler die to him landing on 60-day DL, which means David Price (PB 4-7, average) against Braves ace Max Fried.

The Braves as actually dominated starting with the first three batters, as Acuna was hit by a pitch, Olson doubled him home and Ozuna homered to make it 3-0. It was 6-0 heading into the 8th but Metzek allowed 2 runs and runners on 2nd and 3rd to force Jansen in for a 4-out save. It was a save situation because at 6-2 with 2 runners in, the tying run was on deck.

Jansen retired all four Dodgers, which was key, because our league rules are that if a reliever pitches to at least 5 batters (or in 2 straight games) then he must sit out the next game. Jansen will be available for game 3 to see who plays Milwaukee. 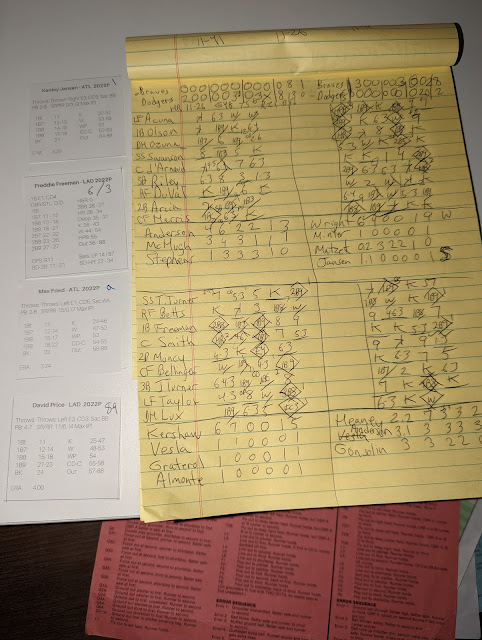 Posted by JohnPudner at 9:29 PM