The mini tournament break from our basketball season pitted the four college teams in our game who featured players in the NBA Finals.

This was the freshman season for both Green and Pritchard's so neither was near the level they would reach int their next three seasons. By their senior seasons Green ranked as the 3rd best player in the nation and Pritchard 2nd at www.valueaddbasketball.com, and according to www.kenpom.com Pritchard was MVP of his last four games before covid cancelled march madness.

The MSU squad has been the most surprising team in our game with the dice being very kind to them in particular in a stunning upset of Indiana's undefeated 1976 champs.

Pritchard is always the master distributor but added 14 points in this game to go along with 15 from Dillon Brooks and 16 from Tyler Dorsey.

The Ducks overcame 23 fouls to only 15 called against the Spartans, and Jordan Bell fouled out to force Chris Boucher back into the game tired for the last 8 possessions. It was always our contention that Oregon would have been the national champs if Boucher was not injured before March Madness, leaving the already thin 7-man rotation a 6-man rotation - and they still only lost by 1 to UNC in the title get that year.

Therefore his opposing center Goran Sutom (only MSU player in double figures with 15) grabbed the offensive rebound. He went back up but 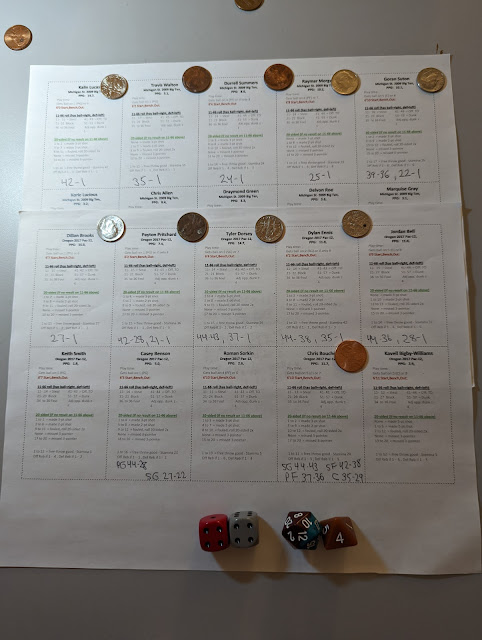 the 11-66 roll was in the possible block range at 26 (the hardest number to block a shot). Boucher's range had to be reduced by one, but because he is a 21-29 when not tired he easily blocked the shot.

He then dunked at the other end to finish with 12 points and make it 80-67 and a couple of possessions later Oregon dribbled it out without taking a shot for the 84-69 win. 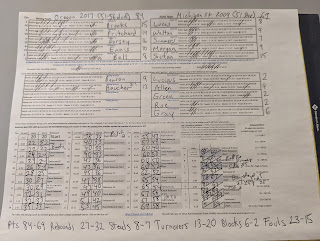