Hakeem Olajuwon set a game record with 9 blocked shots and added 18 rebounds in the greatest defensive performance we've had in the Value Add Basketball Game.

However, Paul Pierce's 1997 Kansas squad played defense of their own with 13 steals to win the turnover battle 22-10 and defeated the Houston 1983 Phi Slamma Jamma squad 64-59 to advance to our Final Four.

The key moment occured with 4:58 (7 possessions) left when Clyde Drexler hit a 3-pointer to pull Houston within 57-58, but then fouled out guarding Pierce at the other end.

Twice after that Kansas scored on plays with a 31 die roll on the two 6-sided dice which would have led to a steal by Drexler and fast break due to his highest possible 11-20 steal range, but his replacement Benny Anders' worst steal range (11-10) meant the best steal ranges in the game were Michael Young and Larry Micheaux (11-15) allowed Kansas to score.

Houston did cut it to 60-59, and with 1:30 (3 possessions) to play and Olajuwan had his record 9th rejection on a roll of 32 (which like the 31 for steals is the universal block number for any block 11-30 on the court which Olajuwon is). However Pierce grabbed the offensive rebound and scored to make it 62-59 en route.to the 64-59 win that sent Kansas to our Final Four. 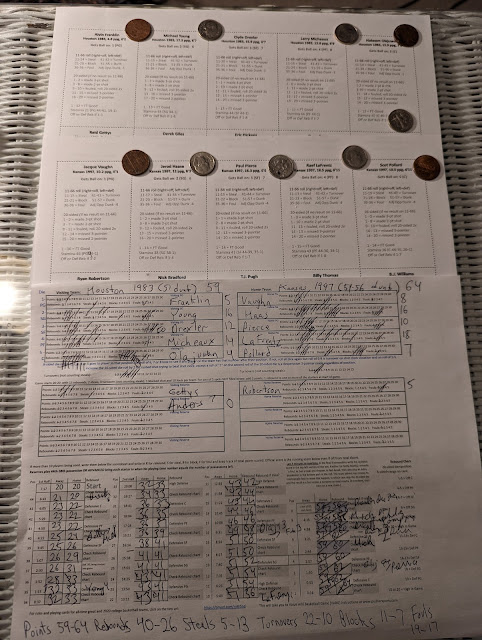