Michigan State 2009 likely has the most complicated substitution choices in the entire Value Add Basketball Game, so a couple of notes.

First, if you don't want to hassle with taking players in and out, you can always use the nascis substitution rule that the bottom rows play possessions 44-38, then you bring in the top row starters for possessions 37-1.

However if you want a sample of how I plan to rotate given the stamina numbers, see below the photo of what my lineup will be on possession 35. 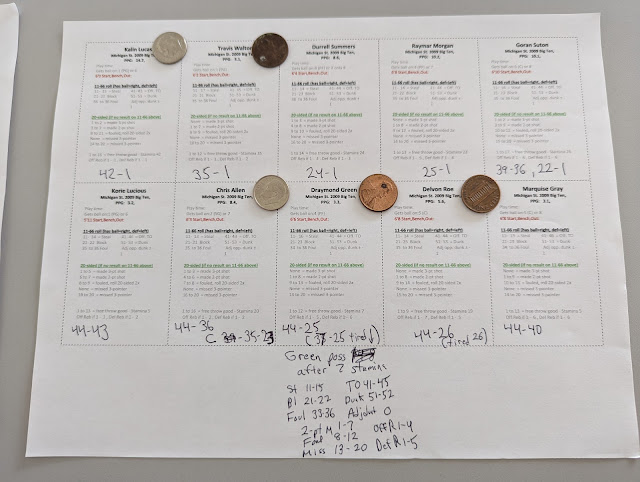 First note the "C 35-23" under shooting guard Chris Allen. That means on those possessions I plan to have him in instead of the center on the top line, but that does not mean he is the center. I read the coins left to right then top to bottom. So the two on the top line are the 1 (pg) and 2 (sg), then I play Allen as the 3 (sf), Green as the 4 (pf) and fox as the 5 (c) since the 2 centers to the right are not in the game on possession 35.

The second tricky part about Michigan State's rotation is their overall endurance levels are low.

The is Draymond's freshman season so his endurance is just 7 unlike his next three seasons when he could dominate for almost a whole game. The rules of the game state that a player can play past the stamina but every range on his card is adjusted by 1 against him. As you can see, I jotted down his ranges under his card for his reduced effectiveness. He is at full strength from possession 44-38, the the card is adjusted for the rest, and once he went past twice as many 14 possessions (so possession 30-25) all ranges.are adjusted by 2 against him.

We will add the actual results after the game.

Posted by JohnPudner at 2:49 PM