The Braves hammered the Giants 11-2 to take a 2 games to 0 lead, needing just one win in Atlanta to take the series.

The rosters and game are similar, but in our Statis-pro season we let injured players play unless they are out for multiple months. This has resulted in the Mets having a great "what-if" season showing how good they looked if healthy - but the Braves have won in Statis-pro despite losing Acuna, Soroka and others from the game since those were long injuries.

Albies, d'Arnaud, Freeman and Swanson all homered, Charlie Morton and two relievers shut down the Giants and shortstop Swanson used his Clutch Defense 5 to make a diving grab for a double play to stop one rally. (Note: we use this Clutch Defense chart. For CD 5 use CD 4 result but defender can add or subtract 1 from number for result.)

Freeman actually drops to the 5-spot in the order against lefties because an 11-13 on the pitcher or his card change from a hit to a strikeout (see bottom right), but he reached all 5 times with a homer, single, 2 walks and reaching on an error. When facing a right-handed pitcher an 88 turns from an out to a single with runners advancing two based (13\88).

For those of you who want to play along with the current playoffs, you can the 2021 projected Statis-pro cards by clicking here. Obviously some players are hotter or folder then their preseason projections and you can click here adjustments to some cards. 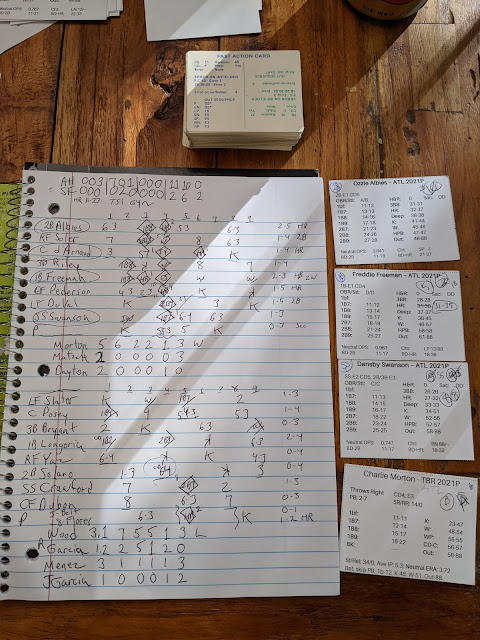 Posted by JohnPudner at 1:20 PM