Jesse Winkler single handedly ruined a pitcher's duel between Sonny Gray and Jack Flaherty to advance the Reds to play at San Diego. Winkler's game-winning two run double in the 9th gave rhe Reds a 5-3 lead that Antone made hold up in the 9th. Winkler's double capped a 4 of 5 day with a homer.

This is still technically an extra regular season game, as is the finale at San Diego to set the playoffs. Since all three teams finished 55-53 in a 3-way tie for the last playoff spot extra games were needed. The Padres received the bye due to the best 3-way head-to-head, but the Reds No. 2 starter for that game is Luis Castillo - a pb 2-8 just like Yu Darvish who will start for the Padres.

The Cardinals finish 55-54 in Statis-pro, which is actually one game better than their 54-55 mark at this stage of the actual season. Perhaps they needed a longer Statis-pro season, as from that point on they went on an incredible tear to now stand at 90-70. 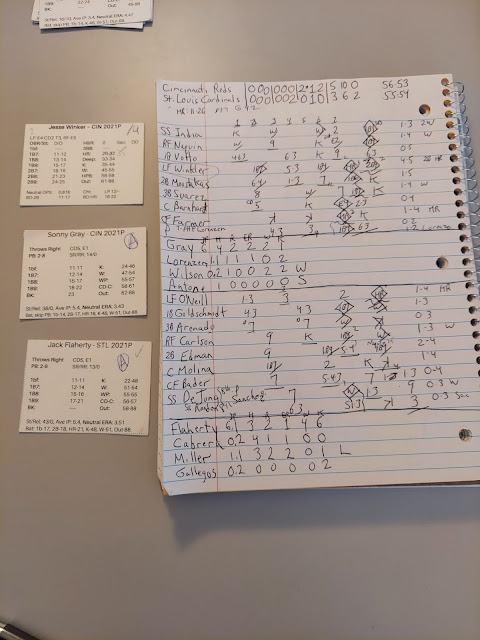