Unfortunately for the Mets JD Davis, we include the clutch defense chart and his card because of the CD1 rating as a 3rd baseman. Twice a CD 3B result with Swanson at the plate resulted in a ball getting past him down the 3rd base line for an rbi double including the first one where a random number if 61 would have been stopped by almost any third baseman.

The first time in the 7th inning Swanson also scoredz meaning the Braves scored 3 runs they would not have scored with even a decent 3rd baseman in a 6-4 win to go up 2 games to 0 heading back to Atlanta. 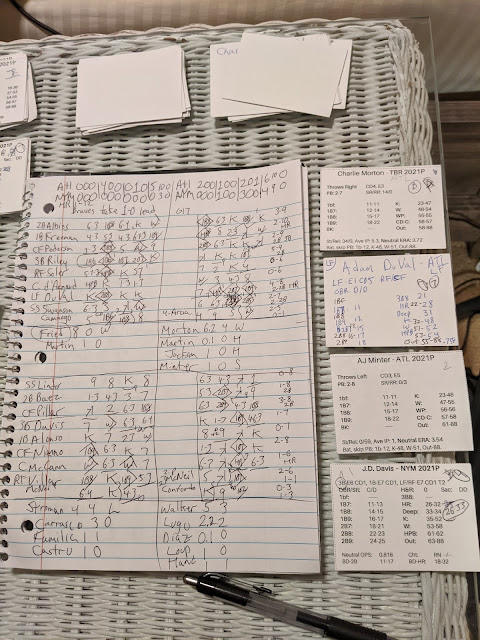 Mookie Betts delivered the game-winning hit off Adams great PB2-9 card with 2 outs in the bottom of the 9th to give the Dodgers a 5-4 win.

In the bottom of the 8th Betts delivered an infield single and stole 2nd to start a rally that appeared to give the Dodgers a 4-2 win, but Nola's 2-run homer in the top of the 9th off Jansen.

Padres can rightly complain that I had Cronenworth, and average fielder, at second base instead of Adam Frazier, a good glover. Cronenworth failed to come up with one clutch play and then threw Justin turners grounder away to start the winning rally. Frazier had pinch hit earlier in the game but will be back in the lineup in LA for game 3.

Dodgers and Braves both lead 2 games to 0.